Newt Gingrich Gripes To Supporters About Regularly Being Asked ‘Are You Still Running?’ 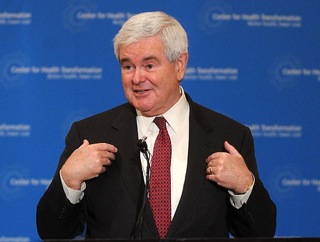 Welcome to the third tier, Newt Gingrich. The former Speaker of the House and 1990s staple has continued his fledgling Presidential campaign despite said campaign apparently consisting almost exclusively of affirmations that it exists. It appears that what is obvious to nearly everyone else in politics is starting to get to the candidate, however, as he griped to supporters in a conference call this week about how often he must disprove the assumption that he has dropped out.

Talking Points Memo has the dismaying contents of this conference call, in which Gingrich, while fielding questions from potential donors, makes an attempt to explain why it is no one seems to care about his campaign. Not surprisingly, the answer involves the one entity Gingrich appears to believe is on the ballot against him: the “media elite”:

“I have people tell me on a regular basis, ‘Gee, are you still running?’” he said, responding to a question from a dispirited supporter asking why the campaign was faring so poorly.

Gingrich blamed the press for his predicament, his favorite target in the last two debates as well.

“The elite media decided in June, July that I was too conservative, too aggressive, and decided I was out of the race,” he said, calling the coverage “self-fulfilling.”

Beside the bizarre claim that the media is ignoring him because they have officially decided in some secret backroom that he is an inadequate candidate, the suggestion that this conclusion results from his conservative philosophy and not his phenomenal incompetence as a presidential candidate is laughable, at best. By “too conservative, too aggressive,” it is unclear whether Gingrich meant the public was confused by his astronomical Tiffany’s bill, his “Dancing Queen” ringtone, the fact that his entire campaign staff seemed to jump ship three months ago (except for, one hopes, whoever wrote this press release), or simply needed to be a little more colorful. In any event, these “elite media” detractors better watch out with what words they use to interpret Gingrich’s failings, because any ad that directly quotes Newt Gingrich verbatim “is a falsehood.”