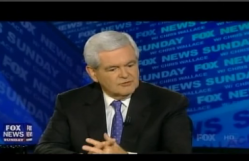 Newt Gingrich wants to know how come President Obama was so willing to speak out against the nutjob pastor in Florida who wanted to burn the Koran but won’t come out and say he thinks the lower Manhattan community center should be moved.

Gingrich appears completely comfortable with equating the media whoring Pastor behind the Koran burning, with Imam Rauf, who along with founding Park51 has been utilized by both Presidents Bush and Obama as a peacemaker. He popped up on Fox News Sunday this morning and told Chris Wallace that all the President should do “is say something mild: they shouldn’t build it there…but the truth is he’s unwilling to say that, and that’s unfortunate.”

Gingrich is apparently on a hyperbolic roll this week. He told the National Review Online that Obama “played a wonderful con” in order to be president and is “authentically dishonest”:

“This is a person who is fundamentally out of touch with how the world works, who happened to have played a wonderful con, as a result of which he is now president.”

“I think he worked very hard at being a person who is normal, reasonable, moderate, bipartisan, transparent, accommodating — none of which was true. In the Alinksy [Ed. note: Saul Alinksy, an American community organizer] tradition, he was being the person he needed to be in order to achieve the position he needed to achieve . . . He was authentically dishonest.

It’s going to be a long seven weeks. FNS clip below.