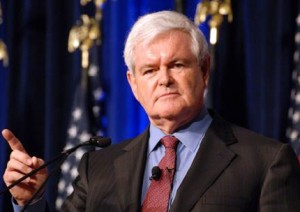 Current GOP frontrunner Newt Gingrich referenced a popular (among right-wingers) but baseless attack against President Obama this weekend during a speech in Naples, Florida. Challenging the President to a series of Lincoln-Douglas style debates, Gingrich told the crowd “If he (President Obama) wants to use a teleprompter, that would be fine with me.”

Unfortunately for Newt, he specifically referenced health care, a subject for which we already have a reliable debate preview.

Newt Gingrich’s overconfidence in debates is understandable. Until recently, he has managed to look smart standing next to the “vaccines make you retarded” candidate, the “two out of three ain’t…oops!” guy, and the real-life Rainier Wolfcastle. They’re also people who had no reason to attack him, unless he attacked them. For the most part, Gingrich was content to scold the debate moderators and attack President Obama.

When he did decide to go on the attack, against steady silver medal contender Mitt Romney, things didn’t go so well. Here’s video of Gingrich’s swipe at the President, followed by his exchange with Romney over, you guessed it, health care reform: (more video of Gingrich’s Florida remarks here)

I hate to break it to Newt Gingrich, but President Obama isn’t going to need a teleprompter to debate Newt Gingrich, he’s going to need fist-pillows so he doesn’t hurt him too badly. Gingrich is an MVP bush-leaguer, but he’s already demonstrated that he can’t hit a big-league curve.

At the risk of letting the cat out of the bag, hasn’t anyone noticed the deafening silence of the Obama reelection apparatus on the subject of Newt Gingrich? Their focus has been Mitt Romney all along, but while I was in DC last week, the degree to which people were “hands-off” on the stream of Gingrich craziness was startling. Now that Gingrich actually has a chance of being the nominee, nobody in the President’s corner wants to do anything to get in his way. You could even make the case that the media is in on it.

The reasons for this are clear. While Mitt Romney is no Babe Ruth, neither is he Eddie Gaedel, so a choice between Romney and Gingrich is a no-brainer. Even if you grant the premise that Gingrich is President Obama’s intellectual equal, or superior, Newt has a wagon-load of baggage that he can’t think, or talk, his way out of. Romney’s key weaknesses with primary voters, on the other hand, have the potential to play well with general election voters. The consistent attack on Romney, that he has “no core,” comes with the disadvantage that it’s then tough to explain to voters what to expect from Romney if he’s elected. Disengaged “independent” voters could see, in Romney, whatever they want to see.

There are probably lots of liberals making shushing motions at me right now, hoping that Gingrich survives his brush with humanity to become the GOP nominee. Admittedly, this is a concern, but conservatives have such delusional faith in Gingrich’s intellect that this critique will only embolden them, and I guarantee you won’t hear it repeated by anyone from Team Obama. Besides, if they wouldn’t listen to Redstate’s Erick Erickson, who torched Newt like Mrs. O’Leary’s cow before his current polling bump, why would they listen to me?