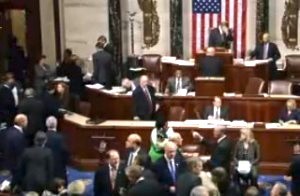 You know how Congress sometimes votes to honor people by naming post offices and other things after them? Well, that normally uncontroversial honor was bestowed upon Maya Angelou today. The House overwhelmingly voted in favor today of naming a post office after her.

I say “overwhelmingly” because not everyone was on board. Yes, there were actually members of Congress who opposed naming a post office for Maya Angelou.

Congressman Steve Israel called out his colleagues for their “disrespectful” move:

Naming post offices is one of the most benign and bipartisan duties we perform in the House of Representatives, and there is rarely any opposition. That’s why I was shocked today as nine Republicans voted against naming a post office after Maya Angelou, indisputably one of our country’s greatest poets, authors and civil rights activists. The fact that these nine Members would cast a no vote shows a blatant disrespect and only adds to the damaging actions they’ve taken this year to reverse progress from long and hard fought civil rights battles.

Most of the nine Republicans haven’t yet explained their votes, but a spokesperson for Harris provided this actual explanation to NBC News:

Congressman Harris voted against the Maya Angelou post office naming because she was a communist sympathizer. His parents escaped communism and he feels that he cannot vote to name a post office in the United States in honor of someone who supported the communist Castro revolution in Cuba.