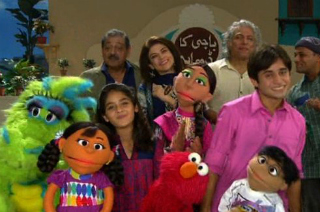 On Tuesday, the Associated Press reported that the United States Agency for International Development (USAID) has canceled funding for a $20 million project to develop a Pakistani version of the long-running American childrens’ show Sesame Street. The reason for termination: Pakistani newspapers reported on the alleged corruption of the local puppet theater working on the project. Who knew puppeteers could be so controversial?

Pakistan Today newspaper reported about “severe” financial irregularities at the local theater, and claims that the group allegedly used the USAID money to pay off debt and award lucrative contracts to relatives. The theater group’s COO denied the corruption allegations and claimed that the United States terminated funding because of a lack of additional available funds.

The show first aired in December and includes famed character Elmo with a group of new Pakistani characters. The plan was for the project to run for at least three seasons. According to the AP, “The U.S. hoped it would improve education in a country where one-third of primary school-age children are not in class. It was also meant to increase tolerance at a time when the influence of radical views is growing.”

The theater group plans to seek new funding sources to continue the show which, in English, is called Our Sim Sim. Like its American counterpart, each of the show’s episodes is based around a word and number, and touches upon the themes of friendship, respect and diversity. As the AP writes, “This last theme is particularly important in Pakistan, where Islamist extremists often target minority religious sects and others who disagree with their views.”