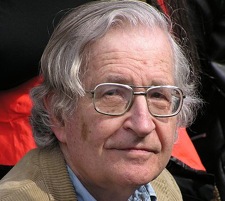 Need more evidence that, with midterm elections looming, the traditional base of support for President Obama is eroding? Consider the recent comments made by Noam Chomsky that sound remarkably similar to anti-Bush rhetoric of roughly three years ago. All that’s missing is a comparison to Hitler. Oh wait…seems like he did that too.

In an interview for the New Statesmen, Alyssa McDonald writes:

What are your thoughts on President Obama?
He’s involved in war crimes right now. For example, targeted assassinations are war crimes. That’s escalated quite sharply under Obama. If you look at WikiLeaks, there are a lot of examples of attacks on civilians.

Last Spring Chomksy earned some attention while receiving an award for lifetime contribution to critical scholarship by the University of Wisconsin, Chomsky warned that, if Americans are not careful, fascism was in its future :

“I’m just old enough to have heard a number of Hitler’s speeches on the radio, and I have a memory of the texture and the tone of the cheering mobs, and I have the dread sense of the dark clouds of fascism gathering…”

Long time readers of Mediaite may remember that this is not the first time that Chomsky has compared his ideological foes to Nazis. Last fall we reported that while speaking to the Commonwealth Club in San Francisco, he alluded to right-wing media as “substantive content — crazy content, but it does give answers,” and warned that if Americans weren’t properly educated about what was really happening to them, they could be in for a repeat of the Nazi takeover of Germany in the 1930s.

In some circles, Chomsky is an extremely well regarded philosopher/linguist/cognitive scientist who is often pointed to by left-of-center types looking to add academic credibility to their argument. Not surprisingly, there are just as many on the right who are quick to write him of as a leftist hack. Such are the times we are now living in.

But regardless to where one stands on the “Chomsky scale” its a notable moment when he comes out and calls out a Democratic President, criticized by many as being “too liberal.” Either way, its not good news for the White House.