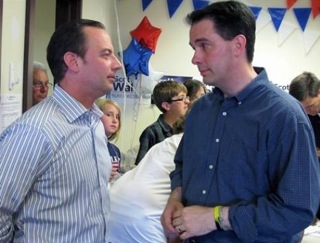 Wisconsin Governor Scott Walker is a heavyweight, world class politician. The mild-mannered Republican made history last night by becoming the first incumbent governor to survive a recall election, after ignominiously becoming the third in history to appear on a recall ballot. Indisputably– and contrary to all the spin from many on the left— Walker has a lot to be proud of, proving that a campaign based exclusively on his record and no intangibles. But he did it all himself, an orphan of a national Republican Party that dropped the ball to the extent of letting this recall effort get to the polls in the first place.

After months of watching Ed Schultz cheerlead and bewildered pollsters flail around trying to make sense of a solidly blue state in 2008 becoming so tumultuous in recent times, today will be a day of much reflection on both sides. There will be lessons and thoughts and all sorts of tea-leaf reading. The news cycle assembly line will churn up innumerable “what does this mean for President Obama?” headlines, blaming the President and shouting “no fair!” in equal measure on the left; calling for the beatification of Walker and RNC Chair Reince Priebus on the right.

President Obama’s involvement in this affair being all of one tweet in favor of Tom Barrett, perhaps a fair argument can be made that if Wisconsin Democrats went as far as to put Barrett on the ballot to begin with, an extra push would have helped. And Republicans are fully entitled to praise the political savvy Walker exhibited– a candidate who is not in any conventional way charismatic or eye-catching who made that near-impossible case to his voters that he should win because he is good at his job, and has the numbers to prove it. But Priebus should be left entirely out of this conversation and thoroughly shamed for the effort in Wisconsin, a recall election wasting thousands of taxpayers’ dollars that had no reason to occur save for Priebus and the national Republican Party falling asleep on the job.

Among the primary responsibilities of the RNC (and the DNC, to be sure) is to support the leaders of the party spearheading policy changes and fostering growth on the state level. The RNC is there to take credit when the party’s numbers grow exponentially (Michael Steele rightfully had no shame in taking credit for the massive gains in 2010 that included a victory for Walker in a very blue Wisconsin) and should be there to take the fall when their resources do nothing to increase the numbers in Congress or, worse, actively hurt the party. Many will feel the impulse to argue that the nation and state Republican Parties are as distinct as states themselves and the federal government. This is only true to the extent that the ethos of the Republican Party is defined by its RNC chair, and many of the voices quick to attack Steele for destroying the Party’s morale will also be those quick to appropriate Walker’s skill to Reince Priebus– including Priebus himself, who has already made the state and national link by claiming Walker’s personal victory is somehow a win for Mitt Romney. If Priebus can connect Wisconsin to the national party, so can we.

And the view from Wisconsin out to DC isn’t a flattering one for Priebus. The fact that Walker had to fight this battle on his own is made clear by the fact that the Democrats got enough signatures to orchestrate a recall election to begin with. Derailing a recall effort takes naught but a bit of effort on the opposition’s part; they are designed to be rare last resorts in times of trouble. Recalling any public official, down to dog catcher, is a Herculean effort. It takes thousands of signatures and hundreds of volunteers and, more challenging than all else, a system within the campaign to monitor the legitimacy of the amassed signatures and make sure the other side isn’t flooding petitions with fake or dead names or repeats. It takes organization and discipline in a way that no other democratic function does. It has only happened three times. One of them happened under Priebus’s watch, against all odds, and that is the bottom line for the national Republican Party– they had nothing to do with Walker’s ability to win, and everything to do with interrupting his work by sitting around and letting Democrats pull a recall on a governor who is obviously, as of last night’s vote, well-regarded by his constituents.

For Steele– to whom Republicans owe the major enthusiasm gap between themselves and the languid Democratic Party; who admitted to being thrilled to watch Walker, a graduate of his class of Republicans, hold his own; who once accurately noted that Priebus’s Republican Party was “talking through its rear end“– beyond a party victory, Wisconsin should be a moral victory over the notoriously lifeless, banausic entity that an ungrateful party replaced him with. For Republicans, having the national narrative revolve around Democrats staging the third recall election in history instead of President Obama’s jobs report should be a red flag that replacing Steele was a huge mistake.