India made history recently by sending an orbiter on a Mars mission. And they managed to do it with less money than the total budget of the movie Mission to Mars.

The New York Times referenced this in a recent political cartoon, drawn by Heng Kim Song: 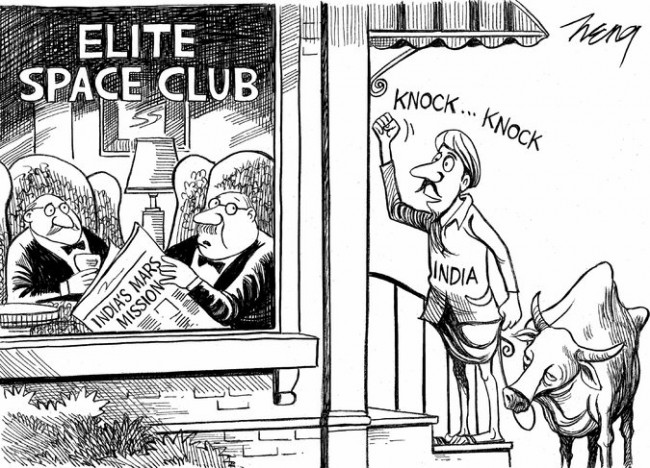 Well, as you can imagine, not everyone had a positive reaction to the cartoon. The Huffington Post had a headline calling it a “racist” comic, and the Twitter reactions were no better:

India’s Budget Mission to Mars – #nytimes this is just a case of sour grapes and not at all in good taste http://t.co/aRAJ56LnAJ

Shame on @NYTimes for a dumb cartoon abt #India's Mars mission that relies on racial stereotypes http://t.co/dIvYLIWC6y

A large number of readers have complained about a recent editorial cartoon in The International New York Times, about India’s foray into space exploration. The intent of the cartoonist, Heng Kim Song, was to highlight how space exploration is no longer the exclusive domain of rich, Western countries. Mr. Heng, who is based in Singapore, uses images and text – often in a provocative way – to make observations about international affairs. We apologize to readers who were offended by the choice of images in this cartoon. Mr. Heng was in no way trying to impugn India, its government or its citizens. We appreciate that readers have shared their feedback, which we welcome. — Andrew Rosenthal, Editorial Page Editor