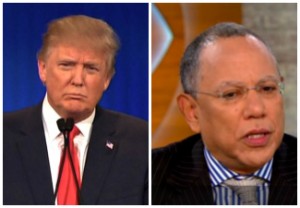 The relative silence on this aspect of the story is deafening, albeit not surprising.

The story we’re talking about, of course, is the New York Times‘ editorial board’s off-the-record conversation with GOP frontrunner Donald Trump back in January. This conversation, which should have never seen the light of day because of its off-the-record nature was later somehow relayed onto Buzzfeed, which promptly shared the potentially-damaging broad strokes around Trump’s comments (the publication’s editor, Ben Smith, says he could not obtain the actual recording or transcript). Smith says the comments — which allegedly consist of Trump softening his tough stance on enforcing immigration law via mass deportation — “could deal a serious blow” to the billionaire’s campaign.

Given how highly-contentious the race for the Republican nomination has become, that conversation is now a major topic on the campaign trail, on cable news and even in the last GOP debate watched by 17 million people on Fox News Thursday night. Ted Cruz and Marco Rubio, both trailing Trump in the polls and running out of time, are demanding the recording be released, while Trump is now being made to defend himself around a conversation he was guaranteed would be kept in confidence.

Per the Fox News transcript of the March 3 debate:

MEGYN KELLY: Back in January, you gave an off-the-record interview to the New York Times. It was apparently audiotaped. Now, a recent report in Buzzfeed citing sources at the Times reports that in that interview you expressed flexibility when it comes to your immigration policy, specifically with respect to your promise to deport the 11 million people who are now living here illegally. You have suggested that you may have expressed some flexibility when it comes to the size of the wall that you want to build. But did you tell them, specifically, that you are flexible when it comes to your deportation plan?

TRUMP (after commenting on Buzzfeed): I did have a meeting with the editorial board of the New York Times, a very nice meeting. Many of those things were off the record, I think at their suggestion and my suggestion. And I think being off the record is a very important thing. I think it’s a very, very powerful thing. And I will say this. These three gentlemen have gone off the record many times with reporters. And I think they want to honor it, and I would always honor that

Note: I gave Trump a “D” for his performance that evening for other obvious reasons, but on this he is 100 percent right. Cruz, Rubio, Kasich, Clinton and Sanders have all provided off the record comments to newspaper boards and reporters. It would be a horrible precedent for Trump to permit the release of the recording as it would forever damage a sacred aspect of journalism in the process. And once that happens, you’re rewarding the New York Times for leaking the story while creating permanent distrust between reporter and subject on anything that is supposed to off the record moving forward.

No matter, many in the media are putting the onus on Trump instead of scolding the Times for allowing this information to get out. This CBS News headline says it all:

Which brings us to the meat of this story: The New York Times leak, which was deliberate and intentional by whomever carried it out. And here’s the best part: The Times‘ executive editor, Dean Baquet, likely has a pretty good idea who was behind the leak, but refuses to pursue it.

Mr. Baquet told me that he didn’t know who had spoken to Buzzfeed to describe the off-the-record portion of the session, and that he didn’t intend to pursue it.

Won’t pursue it? This is a major leak. And an embarrassment to a newspaper with shrinking credibility. But here’s where Mr. Baquet is either being untruthful or lethargic or both: In the same story by Sullivan, here’s what editorial page editor Andrew Rosenthal had to say about the matter:

So that the news side could check that on-the-record information, Mr. Rosenthal sent a digital copy of the recording to a newsroom editor whom he declined to name, with the reminder that there had been an agreement to treat portions of it as off the record.

Wait, what? He’s declining to name the editor? More importantly, why weren’t the on-the-record portions and off-the-record portions recorded separately or split up afterward to avoid this from happening? Why did Rosenthal — whose daily blog reads like something out of the Daily Kos — send the entire recording and whom did he send it to? Both Baquet and Rosenthal could not be reached when asked for comment.

So while I’m no detective, basic deduction would lead anyone over the age of 10 to start asking that nameless newsroom editor and Rosenthal some hard questions, along with turning the focus on Mr. Rosenthal himself, (which won’t happen because his father — A.M Rosenthal — was once a very big deal at the Times, serving as executive editor for over a decade). Of course, an investigation in any capacity won’t happen because Baquet apparently doesn’t believe in accountability if his intention not to even look into the matter is any indication:

“I don’t know how it got out, but I’m certainly not going to do a leak investigation,” says Baquet, who doesn’t even offer an apology or anything resembling remorse to Trump, just odd defiance. Good thing Baquet wasn’t running the show during the Jayson Blair fiasco, because he’d probably see an investigation there as unnecessary, annoying and inconvenient too.

While everyone with an agenda points the finger at Trump and demands he permit the Times to release the recording, almost everyone — liberal, conservative and traditional media alike — are giving the paper a pass here because this information could potentially hurt his candidacy.

Accountability be damned. The ends justifies the means. Big leaks happen in government, in media… that’s understood. But when one happens, an investigation should always follow.

That is, of course, unless Dean Baquet and Andrew Rosenthal are running the show and protecting their own.

Either way, what a fine example they’re setting by doing absolutely nothing… don’t you think?