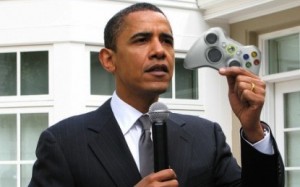 The major networks may have their big, fancy post-debate polls, but there is still one medium that hasn’t been fully exploited by our national politics: video games. And last night, Microsoft took the first step into the fray with a real-time poll of the debate getting voters to react to the candidates as they are speaking. The result? 56 percent of undecided voters watching the debate on Xbox Live thought President Obama won the debate, while 14 percent went for Mitt Romney and 31 percent thought it was a tie.

You may ask yourself, “Why exactly did Xbox Live, of all things, do a debate poll?” Well, Microsoft has been eager to engage users about the presidential election for months, by making their TV experience more “interactive.” Microsoft teamed up with YouGov to conduct live polls as people watch the debates on their Xboxes, in what one Microsoft executive described as “the biggest real-time reaction poll on the presidential debates” ever.

TIME‘s Matt Peckham followed the debate on Xbox Live and observed how Microsoft was able to carry out the live polls. According to Peckham, 130 questions were asked during the debate, collecting over three million responses in total. The questions were posted quickly to get immediate reactions to the topics asked, including the attacks in Libya and issues of national security. However, Peckham did have a number of issues with the live poll, including the “live” part.

I suspect that many watching the debates on Xbox LIVE were, like me, also monitoring or engaging through Twitter and Facebook. It’s what we do these days, often vamping and cracking jokes as events occur. But is all this interaction coming at a cost? Are we too distracted to properly analyze what we’re hearing, especially in a debate where many of the responses were complex or wide-ranging?

By nearly doubling the number of questions, Microsoft was able to push its Xbox LIVE engagement numbers up, which makes for an impressive day-after press release. But something the live poll didn’t measure is how well people answering and watching the responses to twice as many poll questions as during the prior debate — roughly one-and-a-half questions a minute — were actually tuned-in to what Obama and Romney were saying.

The Huffington Post described the Xbox Live poll as showing “voters in motion” as opposed to the “snapshots” provided by other polls. Microsoft broke down the numbers today to explain how Obama got the edge with undecided voters. Roughly 100,000 people were watching the debate on Xbox Live, and 2500 of them were undecided. Over half of those voters thought Obama won, and less than 15 percent gave the advantage to Romney. In fact, for most of the issues asked of undecided voters on Xbox Live, a majority of them said they aligned with Obama on foreign policy issues.

It is also worth pointing out that the Xbox Live poll of the first presidential debate (which even Democrats agree was not Obama’s best performance) gave the advantage to President Obama, so make what you will of these results.