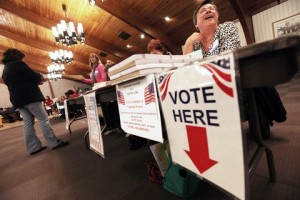 The Democratic National Committee and President Obama‘s reelection campaign have filed a lawsuit to challenge a new law in Ohio that would extend the cutoff date for when members of the military can vote up until, arguing that there should be an “even playing field for all voters.” Military groups and prominent Republicans, including presidential candidate Mitt Romney, have strongly criticized them for the lawsuit.

Obama campaign manager Jim Messina said that the lawsuit is attempting to “reinstate equal, early-voting rights for all Ohioans,” but according to Fox News, those opposed to the lawsuit are angry with the Democrats for seemingly targeting military members.

[T]he National Guard Association and other military groups have fired back, saying it’s “offensive” for Democrats to suggest in the lawsuit it’s arbitrary for service members to get special consideration.

Men and women in uniform typically get more time than other voters to send in absentee ballots since they may be serving in an overseas or domestic location that is not close to their home polling station.

“I’m just outraged by this,” Mike DeWine, the Republican state attorney general in Ohio, told Fox News. “I can’t believe the Obama campaign and the state Democratic Party are actually saying there’s no rational basis for a distinction between someone who is in the military voting and someone who is not in the military.”

Former Democratic congressman John Boccieri, a military veteran in Ohio who supports the president’s reelection, told Fox News that he believes the state Republicans are using veterans groups as “cover fire for their real mission” of trying to restrict people “from voting three days before the election.”