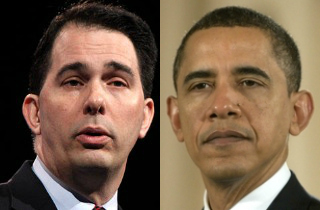 “It’s inexcusable that, over the past several years, just when middle-class families and workers need that kind of security the most, there’s been a sustained, coordinated assault on unions, led by powerful interests and their allies in government,” Obama wrote in a statement Monday evening.

The law would prohibit unions from collecting dues from non-union employees, which critics allege would allow workers to benefit from union-achieved policies while depressing union membership (and therefore enervating collective bargaining power). So-called right-to-work laws, now in place in half the states, have been blamed for the decline of unions over the past quarter century, while supporters say they embolden the economy.

“Wisconsin is a state built by labor, with a proud pro-worker past,” he wrote. “So even as its governor claims victory over working Americans, I’d encourage him to try and score a victory for working Americans — by taking meaningful action to raise their wages and offer them the security of paid leave. That’s how you give hardworking middle-class families a fair shot in the new economy — not by stripping their rights in the workplace, but by offering them all the tools they need to get ahead.”

Walker first came to national attention when he gutted public sector benefits in 2011, over loud protests and an eventual recall effort, and has posted encouraging results in recent GOP presidential polls.