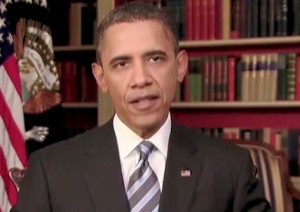 President Obama unsurprisingly devoted his weekly video address to the subject of the deficit negotiations and expressed some disappointment that a bi-partisan deal has yet to be reached. If former presidents Ronald Reagan and Bill Clinton were able to work with leadership in the opposing political party to reach compromise, Obama remains optimistic that now should be no different.

Obama revealed what he thinks would be a fair deal:

“Simply put, it will take a balanced approach, shared sacrifice, and a willingness to make unpopular choices on all our parts. That means spending less on domestic programs. It means spending less on defense programs. It means reforming programs like Medicare to reduce costs and strengthen the program for future generations. And it means taking on the tax code, and cutting out certain tax breaks and deductions for the wealthiest Americans.”

Obama also said that he is willing to compromise and “I expect leaders in Congress to show that same willingness to compromise.” He is prepared to drastically cut spending, but argues you can’t solve the deficit “without asking the wealthiest Americans to pay their fair share.” And in an attempt to not put all the blame on his Republican opponents, Obama states:

“Neither party in this town is blameless. . . . That’s what drives people nuts about Washington. Too often, it’s a place more concerned with playing politics and serving special interests than resolving real problems or focusing on what you’re facing in your own lives.”

However, whether the tone of this message encourages Republicans to be more eager to compromise with him remains to be seen.