Obama’s Craven Embrace of ‘Accidental Diplomacy’ to Save His Presidency 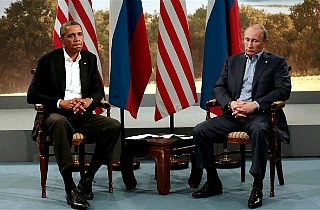 Let me get this straight. When asked at a news conference if there is any way to avert hostilities with Syria over their use of chemical weapons, Secretary of State John Kerry invents a wildly hypothetical scenario: Bashar al-Assad could surrender all his chemical weapons to the international community within a week. Kerry probably thought he might as well have suggested Assad take a leap off the Empire State Building. No one could possibly have taken his statement seriously.

Except that many did. The State Department, flooded with inquiries, called Kerry’s statement a “rhetorical” proposition (translation: not serious). A White House official had told CNN that the statement was a “major goof” and that Kerry had “clearly gone off script.” The White House had inadvertently sent mixed signals in their push for military conflict. Unsurprisingly, Syria’s ally and America’ strategic adversary, Russia, was listening. They offered to make Kerry’s off-the-cuff remark a reality and thus avert military conflict.

Then, within hours, former Sec. Hillary Clinton tells the press that the United States is seriously pursuing the Russian Solution. President Barack Obama tells Fox News that he is hopeful that this diplomatic effort to avert war was something he had discussed with Russian President Vladimir Putin a year ago – indeed, it was his idea.

There is nothing competent about allowing a Cabinet Secretary to set American policy on the fly, but it is the height of recklessness to embrace that extemporaneously-set policy after the fact.

The White House’s desire to find a face-saving way out of this disaster of their own making is understandable. This administration has been pushed into enforcing the global prohibition on chemical weapon use in Syria from the very beginning and they have no desire to follow through with the threat of military force.

This White House, consumed with politics, has no taste for convincing the American people to pursue an unpopular but necessary policy when it is not associated with major domestic reforms. For this president, foreign policy has always been an afterthought.

But the so-called Russian solution is no solution at all. It is a poison chalice that will merely postpone a crisis and make the ultimate reckoning that much more politically dangerous for the White House.

Most obviously, the simple fact is that it is impossible to secure and account for all of Syria’s chemical weapons. Even in a cooperative country not torn apart by years of civil war, the intrusive inspections regime that would be required to enforce such a solution would be difficult to effectively administer. That presumes, however, preventing the future use of chemical weapons – the administration’s stated objective – is still of any concern for this White House.

The most likely outcome is that Assad, seeing a dignified and restorative way out of this crisis while maintaining his control over Syria, agrees to the inspection regime. In conjunction with Moscow, he surrenders a portion of his chemical weapon stockpiles to the international community. Western intelligence indicates that Assad maintains a large chemical weapon stockpile, but Damascus and the Kremlin insist that Syria has fully complied with the framework of the international agreement to avert war.

Except now, the international community and the global anti-war left have a cause to rally around. Whatever support in foreign capitals there was for intervening in the Syrian conflict evaporates. Likewise, support for military action within the president’s Democratic Party disappears. They believe Obama has deftly, if accidentally, spared the country the horrors of war.

Except he has not. When the next atrocity occurs in Syria after the so-called international peace imposed on the world by the altruists in Moscow collapses, America will be powerless to act. All the political capital that Obama amassed with his push for war was spent when he announced to America and the world that the Russians had delivered us peace in our time.

The result will be a weekend presidency and a globe full of state and non-state actors who are newly emboldened after seeing Washington blink. Maybe only a few will act at first, or perhaps there will be a flurry of activity as America’s adversaries test Washington’s newly discovered lack of resolve. In either case, Obama will have significantly diminished the United States’ standing in the world.

All this the result of the president’s vulgar and craven desire to find a way out of having to demonstrate that his words have consequences.