Stunning Twitter Reaction: Many Call For Obama To Turn Down Nobel Prize 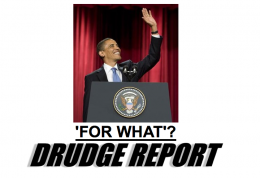 Was anyone not surprised to wake up this morning to news that President Obama had won the Nobel Peace Prize? “In a stunning surprise” was how the Times phrased it. Stunning indeed. Also, why? It may seem like lifetimes but Obama has only been president for nine months! Also, the nominations for the prize closed ELEVEN DAYS after Obama was inaugurated. What exactly has he done to deserve a Nobel Peace prize? No doubt a certain quarter of the right wing will be spending the day pointing out everything he hasn’t done. Even the Times seemed to edge toward that thinking:

With American forces deployed in Iraq and Afghanistan, President Obama’s name had not figured in speculation about the winner until minutes before the prize was announced here.

Yes! Not terribly peaceful. The Nobel board says Obama “has created a new international climate,” which is basically a diplomatic way of saying congratulations on not electing another George W. Bush!!

The view from Twitter reveals a similar sense of surprise from media folk across the board. Also the growing sense that maybe Obama should consider turning the prize down. Give it a couple of more hours to sink in before the real backlash begins. Take a look.

“Should Pres. Obama accept the Nobel Prize? Should he suggest the award is premature and there might be others more deserving?”

Nick Kristof: My blog on Obama’s Nobel: it’s premature, esp when so many are risking lives doing fab work. http://tinyurl.com/ylbrkw

The Note (Rick Klein): wondering if confused react to Obama Peace prize has to do w/ sense that Nobel folks seem to be describing Jan. 20 Obama, not Oct. 9 Obama
5 minutes ago from web

Marc Ambinder: RT @dbgrady: All my life, I’ve said, “Bomb the moon, and the world will bend to your will.” Well played, President Obama. Enjoy your Nobel.

Balk: Has it occurred to anyone that maybe Obama got the Nobel Peace Prize for all his work on the intractable Gates-Crowley conflict?

“Does Nobel prize clerk requires photo ID and birth certificate when picking up? I smell a trap.”

Marc Lamont Hill – Am I the only one who thinks that awarding Barack Obama the Nobel Peace Prize is ABSURD?!?!?!

Mike Madden: RT @tfish77: obama? what was it, his passionate defense of bush torture policies, or his passionate refusal to investigate bush war crimes?

Mark Knoller: Should Pres. Obama accept the Nobel Prize? Should he suggest the award is premature and there might be others more deserving?

Jake Tapper: apparently the standards are more exacting for an ASU honorary degree these days

Patrick Gavin: Also, Arafat // You know who also has a Nobel Peace Prize? Kissinger. (Not actually a joke.) (via @anamariecox)

Rachel Sklar: Obama is to the moon as Joe Wilson was to Obama

Mark Knoller: So — if Nobel cmte based its decision on speeches, Jon Favreau and Ben Rhodes won Obama his Nobel.

The Note (Rick Klein): RT @anamariecox Apparently Nobel prizes now being awarded to anyone who is not George Bush.

Marc Ambinder: RT @Goldberg3000: It might be smart for Obama to turn this prize down, at least until he achieves peace somewhere. Or trade for Olympics

ChuckT Political (Chuck Todd): Axelrod on MSNBC: nothing anyone expected. … Affirmation by the Nobel cmte “are important and significant.”