‘Oh, Bother’: China Censors Winnie The Pooh Because of Comparisons To President Xi 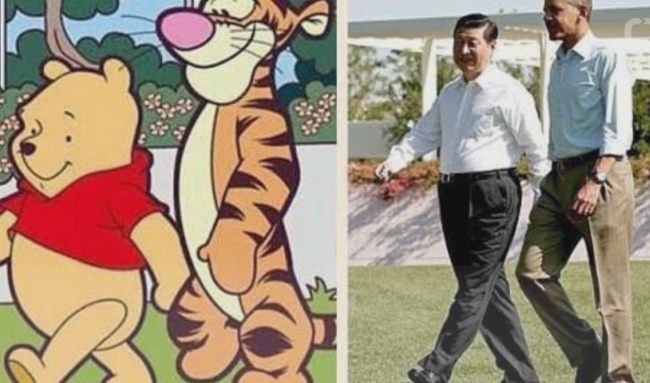 The classic, lovable bear is being blocked from Chinese social media sites because bloggers have been comparing Winnie the Pooh to their President Xi Jinping.

The censoring happened over the weekend on the very popular sites WeChat and Weibo when bloggers kept posting side by sides photos of the Hundred Acre characters and Chinese leaders, mainly President Xi.

The pictures reportedly started back in 2013 and included some of President Xi and President Obama as Pooh and Tigger, Japan’s Prime Minister Shinzo Abe and Xi as Eeyore and Pooh, and one with Xi popping his head out of a car being compared to the kids toy with Pooh doing the same. Not only was the name “Winnie the Pooh” censored, but so were the photos, with the previous ones being taken down.

According to BBC, the censoring is not just to protect the president. “It is not only that China’s censors will not tolerate ridicule of the country’s leader, they do not want this beloved children’s character becoming a kind of online euphemism for the Communist Party’s general secretary,” the article said.

The article said that the Chinese have been being censored since their last leader, and it is not easy to get around the censors.

It is not new for foreign leaders to be compared to fictional characters, like when Russian leader Vladimir Putin was compared to Dobby from Harry Potters or the British Prime Minister Theresa May was said to look like Cruella de Vil, without even getting into every character or thing President Donald Trump has been compared to.