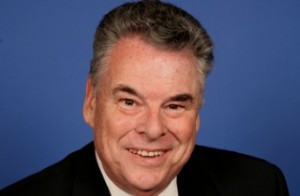 Peter King is fairly ubiquitous in the cable news world, particularly for a congressman (R-NY). But that’s one of the perks of being a Republican who happens to represent a district close to the media capital of the world — home of Fox, CNN and MSNBC — as it makes someone demonstrative and plain-spoken as King a logicial politician to book.

With the New York primary today, King is everywhere on cable news to preview the already-decided Republican side. Donald Trump will win and will likely double is his next closest opponent in John Kasich or Ted Cruz. The only question is whether Trump will break the 50 percent threshold, which will be key to him sweeping delegates across the state. If you’re rooting for contested conventions simply for the sake of entertainment, suspense and drama like we’ve never seen in modern politics, keeping Trump below 50 is what you’re rooting for today.

We’ve been focusing much attention lately on the tone of this election, particularly on the Republican side. Many GOP politicians outside the race (except for Kasich) and pundits alike have lamented the bombastic tone of Trump, who has taken the terms unfiltered and brutal candor down to a whole new level. The frontrunner’s rhetoric — admittedly more muted and relatively restrained lately — is also giving others like King license to muddy the swamp even further. Exhibit A of classless candor/clueless comedy was on display during King’s appearance on Morning Joe this morning:

WILLIE GEIST: What happens tonight on the Republican side? How big does Donald Trump win by the way?

PETER KING: Well, first of all, in case anybody gets confused, I’m not endorsing Ted Cruz. I hate Ted Cruz. And I think I’ll take cyanide if he got the nomination. Now, having said that.

KING: I think you are going to see Donald Trump scoring a big victory tonight. I do not endorse Donald Trump. In fact, I actually voted by absentee ballot for John Kasich. I’m not endorsing John, but I voted for him to really send a message.

So let’s unpack that, shall we?

King — a Republican — will off himself if Cruz — easily the second-leading vote-getter in the GOP primary thus far — gets the nomination. It was a joke, of course, but an awkward one considering this was a fellow party member. There are more than a few commentators on the left and right who believe Ronald Reagan wouldn’t survive this 2016 primary if the 1980 version of him ran today. His “Thou shalt not speak ill of a fellow Republican,” 11th commandment would be laughed out of the room by the likes of King.

Meanwhile, Reagan would be portrayed as a RINO by those to the right of King. Soft. Too compromising. Downright Kasichian. How times have changed…

And this isn’t the first time King has offered up suicide as the only option if Cruz were to represent his party in the general, telling CNN’s Wolf Blitzer last year he would “jump off a bridge” if that day were to come. What next, Congressman? Lighting yourself on fire? Jumping into a den of bears at the Bronx Zoo?

King playing the tough guy is nothing new. But the second part of his answer to Geist is where he’s positively limp. He thinks Trump will win big, but does not endorse him. He voted for Kasich on an absentee ballot, but won’t endorse him, either. So to review, King hates Cruz and voted for Kasich, but won’t man up and simply provide an official endorsement of the guy he, you know… voted for. Chuck Todd and Mika Brzezinski seemed to wonder the same thing later in the conversation:

CHUCK TODD: So you’re voting for somebody (Kasich) who you think doesn’t have a snowballs chance?

MIKA BRZEZINSKI: And you’re not endorsing him?

KING: No, no I think he’s a real possibility but I also — the likelihood is Donald Trump is going to be at the nomination. I want Donald Trump to know that if he wants to support our Republicans, he’s gotta get more substance, he’s got to really learn what he’s talking about.

Yup. Just another morning on the road to the White House…

Thankfully, Peter King will be a little less ubiquitous on our TV screens when the primary moves on from the Empire State tomorrow.

Watch the segment above, via MSNBC.
— —