Pat Buchanan Thinks That The Supreme Court Is Too Jewish 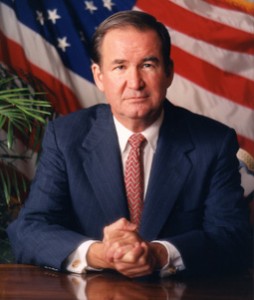 As conservatives continued to look for a good mode of attack for Elena Kagan, Pat Buchanan chose a novel approach when he decided to criticize the Supreme Court nominee for being Jewish. Well, to be more specific, he criticized Obama and liberals for not nominating enough blacks, Protestants, and Catholics but, when you write a blog post that can basically be boiled down to “There are too many Jews on the Supreme Court,” you’re sure to get a negative backlash (which is just what Buchanan has gotten.)

“If Kagan is confirmed, Jews, who represent less than 2 percent of the U.S. population, will have 33 percent of the Supreme Court seats.
Is this the Democrats’ idea of diversity?”

It took a couple of days, but that quote and the post around it have begun to get the inevitable media backlash. It’s been discussed on Morning Joe and Face the Nation and, today, Charles Cooper wrote a lengthy blog post about it for CBS News:

“Buchanan didn’t say it but he didn’t have to: The real danger is that too many Jews will wind up sitting on the highest court in the land. And that would be a bad thing for the republic.

Not individual Americans, mind you.

So much for Buchanan’s past criticism of identity politics as a betrayal of the broader “American” narrative (when, it goes without saying,) the nation was overwhelmingly an Anglo-Saxon, Christian republic.”

The first question to be asked is whether or not one believes that Buchanan makes a good point. Not about Jews, of course, but about the Supreme Court. The answer is: not really. Yes, one can easily see the benefits of diversity on the Supreme Court, but Buchanan’s argument suffers because he neglects to mention other imbalances: for example the Court is also disproportionate in its gender makeup. And he certainly didn’t mention the fact that there are no homosexuals on the bench (that we know of). Why didn’t he mention those facts? Probably because his post was more about attacking the Democrat’s SCOTUS nominee than it was about questions of diversity. Buchanan’s closing line of “Conservatives will not soon get another opportunity like this to take down Ivy League pretensions to represent and rule America,” clearly belies his intentions.

So, once one decides that Buchanan didn’t make the strongest of arguments, the question then becomes whether or not his statement was as offensive (as many in the media are likely to make it out to be.) The answer to that is no. The only reason it seems more offensive is because of the context of who was it was about, and who was saying it. Attacking the amount of Jews in the Supreme Court seems offensive because there are still people in this country who believe that there are secret Jewish organizations that run the government and media and have evil, secret meetings somewhere (this writer, as a Half Jew, is only allowed to wait in the lobby). Buchanan’s comments seemed to play right into those beliefs.

The fact that it was Buchanan who said those remarks makes it worse. Remember that this is a man who once wrote that Hitler was a “genius” and “an individual of great courage.” We probably wouldn’t even be discussing the blog post if anyone else had written it. If you say that the Supreme Court shouldn’t have a disproportionate amount of a certain minority, you’re not necessarily being bigoted. But, if Pat Buchanan says the same thing about Jews, it certainly sounds like he is.

Whether or not his blog post was anti-Semitic is better left to another writer (or the commenters below.) But I would posit that it’s irrelevant, since the basic argument Buchanan makes doesn’t really hold up. The Supreme Court should be diverse because America is diverse. However, if a potential judge is worthy, we shouldn’t get rid of them because we’ve met our “Jew quota.” We also, though, shouldn’t attack Buchanan for making an offensive statement that really wasn’t that offensive. Especially when he’s made so many better ones.