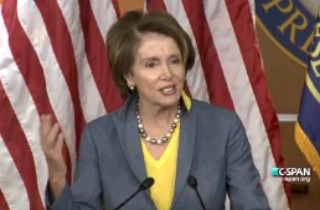 Following Louisiana GOP Rep. Steve Scalise‘s admission that he spoke at a white supremacist convention in 2002, House Minority Leader Nancy Pelosi condemned the “deeply troubling” news and blasted the entire Republican Party for its actions on issues like the Voting Rights Act and immigration.

In a statement, Pelosi said the Republican Party’s “actions speak louder than whatever Steve Scalise said to that group in 2002,” because the GOP neglected to support the Voting Rights Act or deal with comprehensive immigration reform. She also criticized her Republican colleagues for supporting a “known extremist group,” the American Center for Law and Justice, in its actions attempting to overturn President Barack Obama‘s executive actions on immigration.

She also condemned House Speaker John Boehner for failing to “stand up to the most extreme elements of his party.”

After Scalise admitted to speaking at a 2002 meeting of the European-American Unity and Rights Organization (EURO), former Ku Klux Klan leader and neo-Nazi David Duke, who founded EURO, called Scalise “a fine family man and a good person.” In addition, Congresswoman Yvette Clarke (D-N.Y.), a member of the Congressional Black Caucus, called for a House investigation. Duke also threatened to out any politician with whom he has ties, Republican or Democrat, who throws Scalise under the bus, and Kenny Knight, a well-known klansman and the organizer of the 2002 convention, said he personally invited Scalise but does not think he “knew anything about EURO.”

“Whip Scalise’s involvement with a group classified by the Anti-Defamation League as anti-Semitic and the Southern Poverty Law Center as a hate group is deeply troubling for a top Republican leader in the House.

However, actions speak louder than whatever Steve Scalise said to that group in 2002.  Just this year, House Republicans have refused to restore the Voting Rights Act or pass comprehensive immigration reform, and leading Republican members are now actively supporting in the federal courts efforts by another known extremist group, the American Center for Law and Justice, which is seeking to overturn the President’s immigration executive actions.

Speaker Boehner’s silence on this matter is yet another example of his consistent failure to stand up to the most extreme elements of his party.”