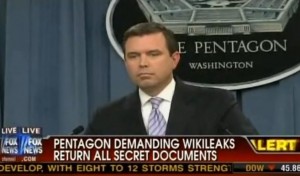 In a surprisingly light-handed statement (considering the pending government hit put out on SPC Bradley Manning), Pentagon spokesman Geoff Morrell? asked the people behind WikiLeaks to “do the right thing” today by forking over around 15,000 currently unreleased documents on the war in Afghanistan, as well as removing the 70,000 documents they put online in July.

Morrell claims that making the private documents available to the public has jeopardized the safety of U.S. troops and Afghan informants whose names were included in the files, and that deleting them from the site would help prevent further damage. However, as evidenced by the recently posted and decidedly ominous 1.4 gigabyte encrypted file entitled “Insurance” looming on the WikiLeaks site, it seems the Pentagon and WikiLeaks have different ideas of what doing the “right thing” entails.

Though no one knows if the file actually contains more sensitive information or if it’s just a scare tactic to keep the government from doing anything more invasive than politely asking for their documents back, WikiLeaks Editor-in-Chief Julian Assange said when asked about the massive file that “one could imagine in a similar situation that it might be worth ensuring that important parts of history do not disappear.”

How cryptic! Who knows if the file will ever have to be opened, though, because as Morrell admits in the video below, the plan of action for now is to hope that Assange and associates are good people: “If doing the right thing is not good enough for them, then we will figure out what other alternatives we have to compel them to do the right thing.”