Phil Donahue: “If We Didn’t Have Glenn Beck, We’d Have To Invent Him” 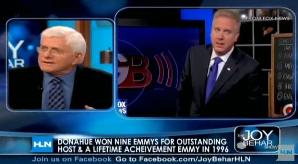 Donahue says he’s a viewer of the Fox News host, but also pointed to a Daily Kos video as a must-watch Beck crash course.

“What do you think of this upsurge of the Becks and the Limbaughs and Fox News and how powerful it is in the country right now?” asked Behar.

Donahue said it’s important to question the “kind of influence” they have, and called Beck and Rush Limbaugh “very, very interesting.” But then he suggested some specific viewing material – “Full Mental Beck.” This Daily Kos video from last August is described by Donahue as “seven minutes of a montage of Beck, with the blackboard.” But you can imagine, since it comes from Daily Kos, the overall tone. But also – last August? There’s months of material Donahue is avoiding!

Although he remains a viewer, he’s also skeptical, questioning the motives of the tea partiers. He pointed to someone like Glenn Beck as a leader that’s made for this specific time. “If we didn’t have Glenn Beck, we’d have to invent him,” said Donahue.