Platitudes and Attitudes: What to Expect from Kennedy Coverage

Platitudes and Attitudes: What to Expect from Kennedy Coverage 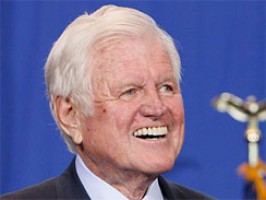 Massachusetts Sen. Edward Kennedy died late Tuesday at his home in Hyannis Port, Massachusetts, after a lengthy battle with brain cancer. The death of any legendary public figure comes with cliches, but the life and career of Kennedy was far too complex to sum up in the inevitable and hackneyed phrases (regardless of how correct they may or may not be). But since the media has never been afraid of the obvious, following is a list of the expected phrases and narratives you can expect to read and hear in the coming days.

For colleagues in the Senate (on both sides of the aisle) he was widely considered as both gracious and generous. However, Kennedy was a lightening rod for both praise and criticism, and as the coverage of Kennedy’s death and career continues, we will begin to see the following narratives discussed: