Poll: Majority Agree With Obama’s Immigration Move, Yields No Bump In Support For The President 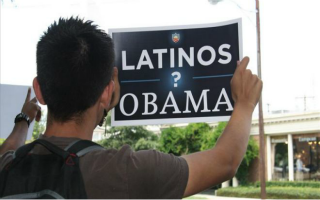 A recent Bloomberg poll finds that nearly two thirds of Americans surveyed agree with President Barack Obama’s decision to halt the deportation of the children of illegal immigrants. However, daily tracking polls show that Obama has received no boost in the head-to-head match up against Republican presidential candidate Mitt Romney in the period that has elapsed since the President’s announcement. This news, combined with the blatant lack of interest in Hispanic voters from the Romney campaign, portends a tough year for Latinos who are likely to be marginalized as voters’ concerns with the state of the economy overshadow nearly every other issue.

On Tuesday, Bloomberg released the findings from a June 15 – 17 survey that showed that 64 percent of respondents agree with Obama’s decision to issue a directive that would halt the deportation of the children of illegal immigrants and instead offer them work visas.

Contrast those findings with Gallup’s daily tracking polls since Obama’s announcement last week and you find a minimal-to-nonexistent boost for Obama against Romney. Rasmussen Reports automated tracing survey (of likely voters) finds Romney continuing to pull away from Obama over that same period.

The Bloomberg poll does not release its sample set, e.g. the number of self-identified Republicans, Democrats and independent voters surveyed. It is safe to assume, however, that 64 percent includes a fair amount of overlap across partisan affiliations.

But the lack of any bump in support for the President suggests that, despite the popularity of this directive, it is not an election year issue. In fact, Real Clear Politics Sean Trende writes Tuesday that Obama runs a real electoral risk in further alienating middle class white voters in greater proportion to the swing-voting Hispanics that he has energized.

Those white voters, who are already lukewarm about the job Obama has done as president, dominate the electoral vote-rich industrial Midwest, while Hispanics form a major portion of the voting population in the electorally inconsequential Southwest.

Compare this news with a report from The Hill’s Christian Heinze form last week that noted the conspicuous lack of Hispanic outreach from the Romney campaign and an ABC News report that Florida Sen. Marco Rubio is not being vetted as a potential vice presidential pick, and you have a rather bleak picture Latino issues ahead of the rest of the 2012 cycle.

Romney appears to be following a trajectory that he pursued in the Republican primary elections – namely, ignoring a powerful demographic with the understanding that he doesn’t need them to win. Then, it was the “severely conservative” tea party vote. Today, it is more than 30 percent of the Hispanic vote.

Romney appears to be banking on winning the Republican’s traditional floor of Hispanic voters and not expanding his reach out towards the GOP’s ceiling for Latinos (traditionally believed to be approximately 40 – 44 percent of the vote, a feat achieved by George W. Bush in 2000 and 2004 respectively). Romney perceives the swing in independent and white, non-college educated voters towards Republicans in November to be sufficient to win the White House. He may be correct.

With a lack of any electoral boost for Obama after his Hail Mary pass to Latino voters, Democrats, too, are unlikely to devote further outreach efforts to the Hispanic community. It looks as though 2012 will be a year when the Latino vote will be again undervalued. But there are few electoral cycles left in American history when politicians will have that luxury as Hispanic voters grow in population and political clout.