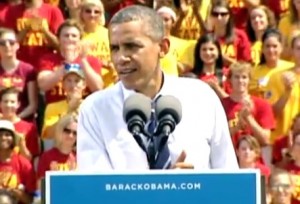 With the storm-delayed kickoff of the Republican National Convention, there was a lot of political speechifying and sloganeering on Tuesday, but John Boehner‘s Patrick Swayze Road House act (some called it disrespectful, but the real outrage is that Boehner and the Republicans want the American people to be their “regular Saturday night thing”), Ann Romney‘s brave stand in favor of moms and love (I could swear there was also a subtext in favor of kittens), and even Chris Christie‘s fiery endorsement of his own 2016 candidacy (he talked about a candidate “telling hard truths,” but Mitt Romney can’t even get through the line “I’m Mitt Romney and I approved this message” without getting into trouble), were overshadowed by a single line from President Obama‘s Ames, Iowa stump speech.

Speaking to a crowd at Iowa State University, the President delivered a gut-punch to Republican rival Mitt Romney, whose Romneycare plan was the basis for the Affordable Care Act, which Romney promises to repeal on day one of his administration.

“Governor Romney promised that sometime between taking the Oval Office and going to the Inaugural Ball,” the President said, “he’d sit right down, grab a pen, and kick 7 million young people off their parent’s plan by repealing health reform. Day one, that’s what he says he’s going to do.”

To lusty jeers from the crowd, the President continued, “Maybe we should call his plan ‘Romney Doesn’t Care.'”

He paused for the crowd’s laughter, then added “Because I do care. I do care. And this law is here to stay. Now is not the time to refight the battles of the last four years. Now is the time for us to go ahead and move forward.”

“And I’ll work with anybody who wants to make our health care system better, but I’m not going to stand by and let folks talk about how we should go back to the days when ordinary folks who are working really hard suddenly find themselves losing their home, losing their savings just because they get sick.”

If you’re a millionaire, Romney cares, and if you have a vagina, Romney cares in ways that you wish he wouldn’t, but other than that, the President’s jab is the perfect bumper sticker for every Romney policy.

The Romney campaign sent out a memo on Tuesday whining about the President breaking with tradition and campaigning during his opponent’s convention, and it’s not hard to see why. While the news networks fall all over themselves to wrap Mitt Romney in gauze, President Obama cut through it all with just a few seconds of truth.