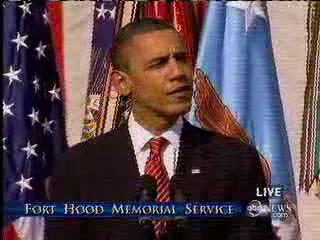 President Barack Obama spoke today the Fort Hood memorial for 15 minutes, in a speech that is already garnering strong praise from around the media world.

All broadcast networks took in live, as did the cable news channels. The video is below, as is some reaction from Twitter.

Mark Knoller: It’s a very moving moment. The silence of the dead is deafening.

Brian Stelter: RT @ChuckTodd: That’s going to be a speech that’s remembered and quoted from for quite some time.

Mark Knoller: Command Sergeant Major Donald Felt now sounding the Final Roll Call – including the silence when the name of a fallen soldier is called.

Chuck Todd: That’s going to be a speech that’s remembered and quoted from for quite some time; struck a balance of commander and consoler; not easy.

Marc Ambinder: RT @TheRickWilson: The signifiers in this speech (“no faith” “same extremists” “same war”) all telling, proper and better than expected.

Marc Ambinder: I realize I just had my Chris Matthews chill up the leg moment, but hey — the speech was just damn good.

Mark Knoller: Obama closes speech: “we say goodbye to those who now belong to eternity. We press ahead in pursuit of the peace that guided their svc.”

Mark Knoller: Obama says of today’s mililtary: “We need not look to the past for greatness, because it is before our very eyes.”

Chuck Todd: From the beginning, the Obama admin has linked Pakistan and Afghanistan together, hammering home point countries are connected.

Marc Ambinder: I agree. RT @chrisgolden: This is the best speech Pres. Obama has given, domestically, since his Inauguration