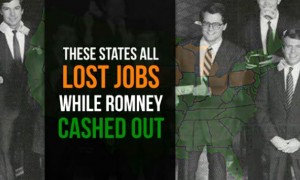 Despite a massive push by the mainstream media and weak-kneed Democrats to insist that the Obama campaign’s strategy of challenging Mitt Romney‘s job creation claims as CEO of Bain Capital wasn’t working, the Bill Burton-led SuperPAC Priorities USA Action has launched a new attack centered on Bain’s handling of Stage Stores, a clothing chain that went bankrupt after Bain cashed out to the tune of $175 million. More than that, though, Burton is pushing against the evidence-free narrative that the attacks don’t work.

The 30-second video talks about Bain’s highly-leveraged acquisition of what would become Stage Stores, a chain of clothing stores that the ad says sank under the weight of debt that Bain incurred with a too-rapid expansion, declaring bankruptcy 3 years after Bain cashed out, shedding 5,700 jobs.

Romney’s defenders will point out that the 2000 bankruptcy occurred after Romney had left Bain, and weirdly argue that since the chain survived the bankruptcy, and bounced back significantly, there’s nothing to see here. Bain Capital, itself, issued a statement that seems to wash their hands of the company’s 2000 bankruptcy, yet seems to take credit for their subsequent revival:

“Under Bain Capital’s ownership of Stage Stores from 1988 to 1997, the company doubled the number of stores, doubled the number of employees and grew revenues by 70 percent. When the company faced challenging economic times in 2000, Bain Capital had no management control or board representation and was only a small public shareholder. Today, Stage Stores remains a successful, publicly traded company, with over $1.5 billion in revenues and more than 14,000 employees.”

The Priorities ad is pegged to Romney’s current bus tour, pointing out that “These states all lost jobs while Romney cashed out.”

More importantly, though, the ad is supported by a memo that cites late-to-the-party evidence that the massive push to quash the Bain attacks as ineffective was based on something other than fact:

Columbus Focus Group: Romney “out of touch, and in the pocket for Wall Street and big finance.” … [Democracy Corps, 6/11/12]

ABC’s Amy Walter: “It is clear that ads attacking Romney for his record at Bain Capital have penetrated.” … [ABC News, 6/8/12]

Unfortunately, Priorities is pushing against a firmly-entrenched media narrative that has the support of everyone who benefits from the generosity of billionaires. One of the great equalizers in modern campaigns is that, even when you don’t have huge piles of cash for an ad buy, cable news networks will often give ads significant airtime while discussing them. It will be interesting to see if the Bain-complicit media will do the same for this ad.