Caleb J. Hull is a Republican operative in the Washington, D.C. area, known for his pro-Trump rhetoric on social media, as well as his relentless targeting of Trump critics online. He’ll create pithy captions, video montages, and snarky memes, and post tweet after tweet, signaling for his more than 138,000 Twitter followers to gather the digital torches and pitchforks.

But the prolific tweeter has been operating social media accounts under multiple usernames, and has a secret history of of offensive posts astonishing in both the quantity and breadth of who he has targeted. His posts check off a Bigot’s Bingo of vile content, attacking African-Americans, Hispanics, Asians, LGBTQ people, women, Muslims, Jews, AIDS and cancer patients, and the mentally disabled.

[In this article, we are censoring certain pejorative terms with asterisks, but Hull spelled them out completely in his posts, screen caps of which are contained in this article. Warning: Offensive, NSFW content is found below.]

“I need to increase my arsenal of offensive pictures,” Hull wrote in one tweet with an image of a chicken photoshopped to look like a watermelon, captioned “Every N*ggas Dream.” 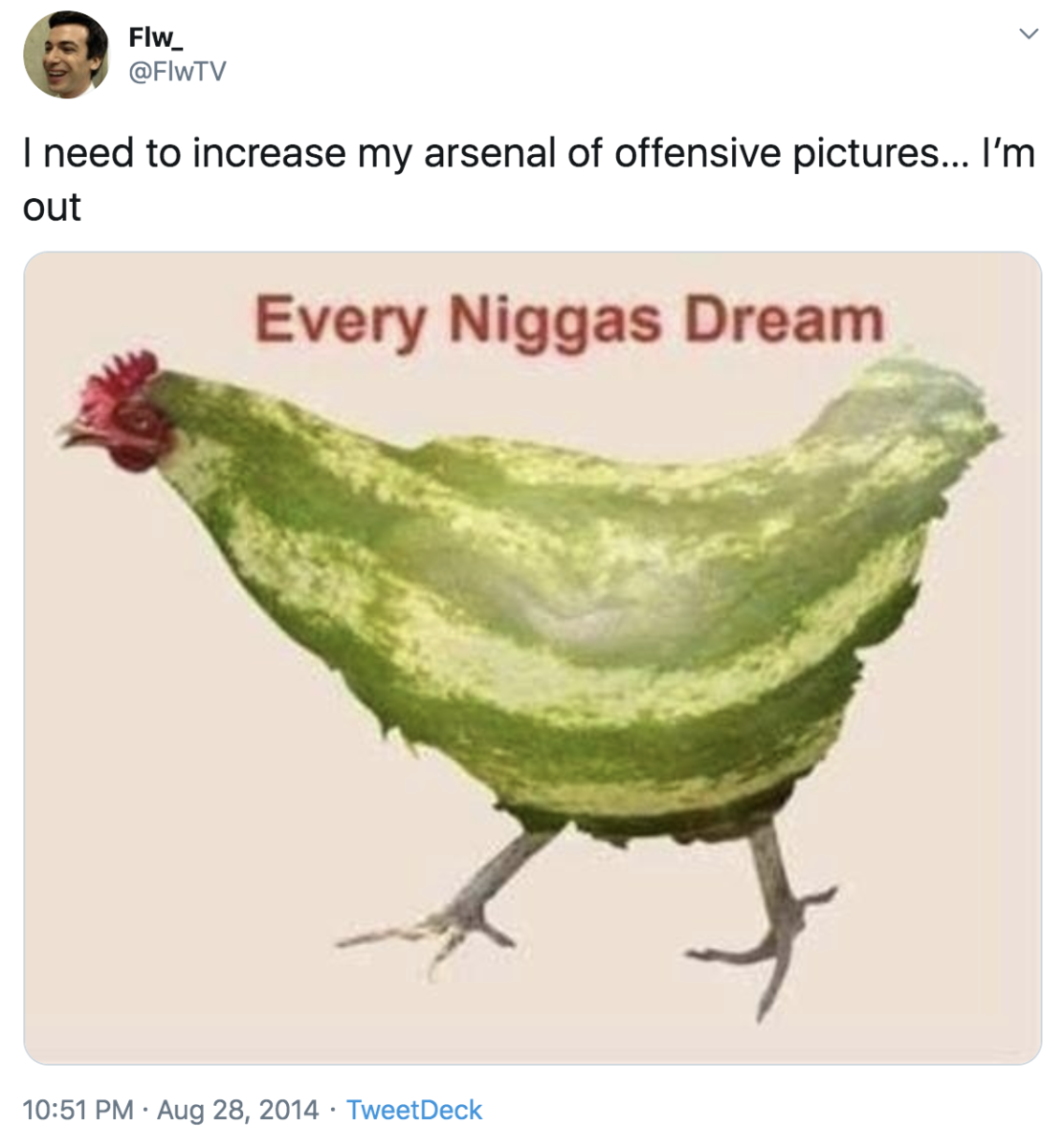 Hull’s aggressive pro-Trump stance and social media talents have caught the eye of some of the top “blue check” pro-Trump Twitter accounts, and he has been amplified by many of them, including members of the president’s family. One of his tweets was retweeted by Trump himself in 2018.

Watch the sign language interpreter — She clearly had one of the hardest assignments of her life… @calebjhull ???? pic.twitter.com/0mMvk2AURl

They’re not. No one said anything to me on the street.

The list of Hull’s targets over the years is long and includes Democratic Rep. Alexandria Ocasio-Cortez, who complained that Hull “creepily” took a photo of her with a staffer who was eating a hamburger after she had said Americans should eat less beef; Never Trumper Bill Kristol because his wife donated to a Democrat, Gov. Ralph Northam; “Kent State gun girl” Kaitlan Bennett for an interaction she had with a father and his teenage daughter at a Women’s March event; and Lincoln Project co-founder, author, and former Republican strategist Rick Wilson.

Regarding Wilson, Hull searched through years of posts from Wilson and his family members. In a 2014 Instagram post by Wilson’s wife, Molly Wilson, Hull found a photo on a boat showing a cooler painted with a confederate flag and “The South Will Rise Again.” The contemporaneous comments on the Instagram post made it clear that the cooler belonged to the Wilsons’ son, who was in high school at the time.

As the comments noted and Mediaite confirmed, the cooler was a gift from the son’s girlfriend at the time. It was disposed of years ago, and is no longer in the possession of any Wilson family member.

Hull posted photos of the cooler, via screenshots from Molly Wilson’s 2014 Instagram post and another post from Rick Wilson in early 2015, showing the cooler in the back of a moving truck with other items being removed from the family home. 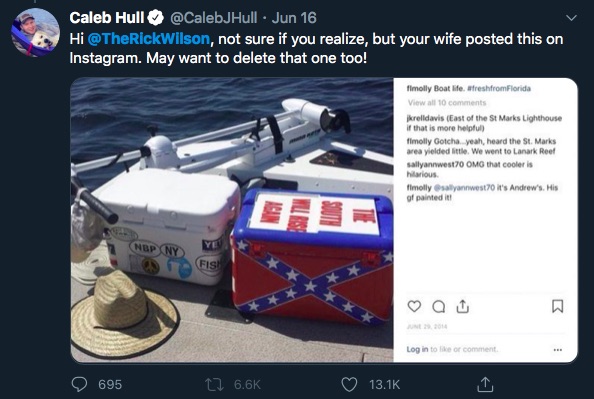 Dozens of tweets from Hull followed, attacking Wilson and his family for the “Racist Cooler,” and attacking Wilson for the Lincoln Project’s criticism of President Donald Trump over his defense of military bases named after Confederate generals and other monuments to the Confederacy.

Hull’s personal username on Twitter was originally @whatsafeed. At some point in mid-2014, he changed it to @CalebJHull. Searches of the Twitter archives for “@whatsafeed” show replies to @CalebJHull, reflecting the change in username.

While this article was being written, Hull temporarily made the @CalebJHull account private, and deleted multiple recent tweets, many of which mocked Joe Biden. 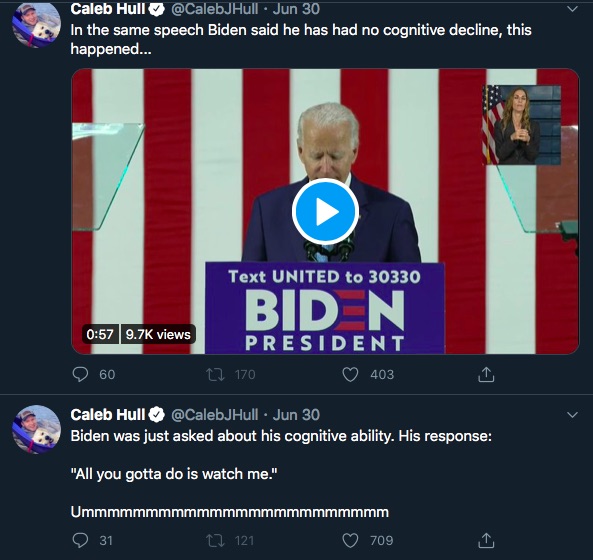 Shortly before this article was set to publish, Hull made his account public again and tweeted out a lengthy apology over the posts, blaming “an activist” for preparing to “publish a story on comments I made many years ago when I was a teenager.” Hull’s explanation is that he was “going through a very difficult time,” including his parents’ divorce and death of his grandparents, depression, and said he was “vulnerable and impressionable” and “fell in with a bad crowd.”

He does not get into specifics on what the “vile things” were. (We have screencaps of some of them below, however.)

Important disclosure: Rick Wilson and his family are long-time friends of one of the authors of this article, Sarah Rumpf. There is no way to be completely objective when writing about a friend, or the child of a friend, and we won’t pretend otherwise.

[UPDATE: While we were working on this article, Jared Holt of Right Wing Watch was apparently investigating Hull’s old posts as well. He may have been the “activist” to whom Hull directed his apology tweet. Earlier today, Holt published an article with additional background information regarding Hull’s background and his old posts. All of the information in this article was independently researched and verified by Mediaite.]

Back to Hull’s online history: in addition to @whatsafeed/@CalebJHull, Hull had another Twitter account, @FlwTV. Hull was still posting on it as late as the end of last year, and deleted it this week, along with many other posts on his various social media accounts. 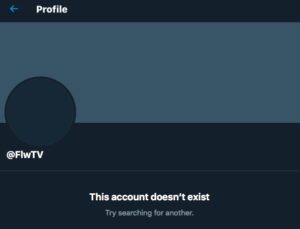 Unfortunately for Hull, screenshots and internet archives have left a very ugly trail of breadcrumbs that connect back to him.

Again, Hull’s tweeted apology does not specifically admit that he was responsible for the @FlwTV twitter account, but there are a long list of connections establishing his control of that account, primarily running through the gaming world.

During the past decade, Hull is known to have set up multiple accounts with usernames that used “Flw_” or “FlwTV.” Other online users sometimes referred to him as “Flow.” On the video game live streaming platform Twitch, Hull went as @Flw_.

The internet archives for the @FlwTV account show him tweeting, “Decided to make a gaming Twitter,” as well as a reply to @whatsafeed referring to him as “flow.”

The Twitch account and the TikTok account both used the same profile photo that is currently shown in Hull’s current Facebook page, showing Hull with his dog and the “30 Under 30” logo, referring to his inclusion on the 2018 list compiled by the Washington Examiner/Red Alert Politics. His personal Twitter account currently uses a different profile photo, but previously used that photo as recently as 2019, as shown by internet archive searches. 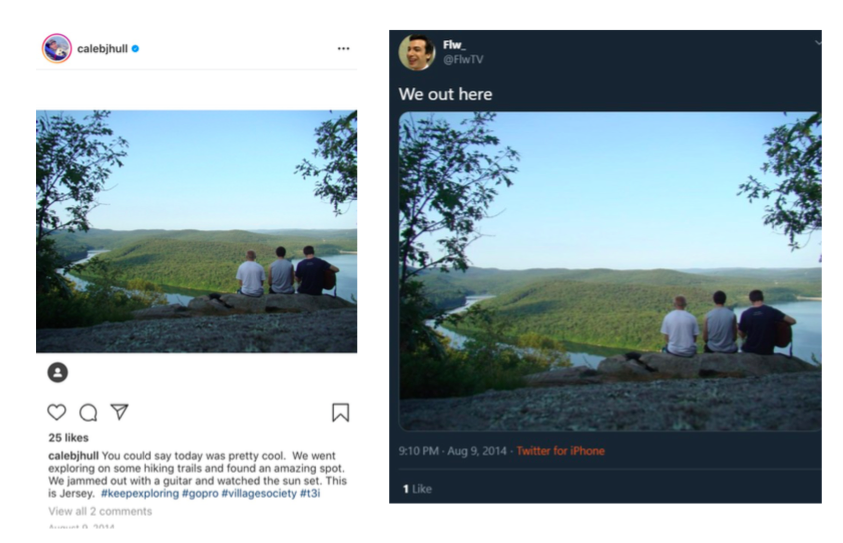 Hull also repeatedly tweeted asking his @FlwTV followers to connect with him on a Skype account, CalebJHull. 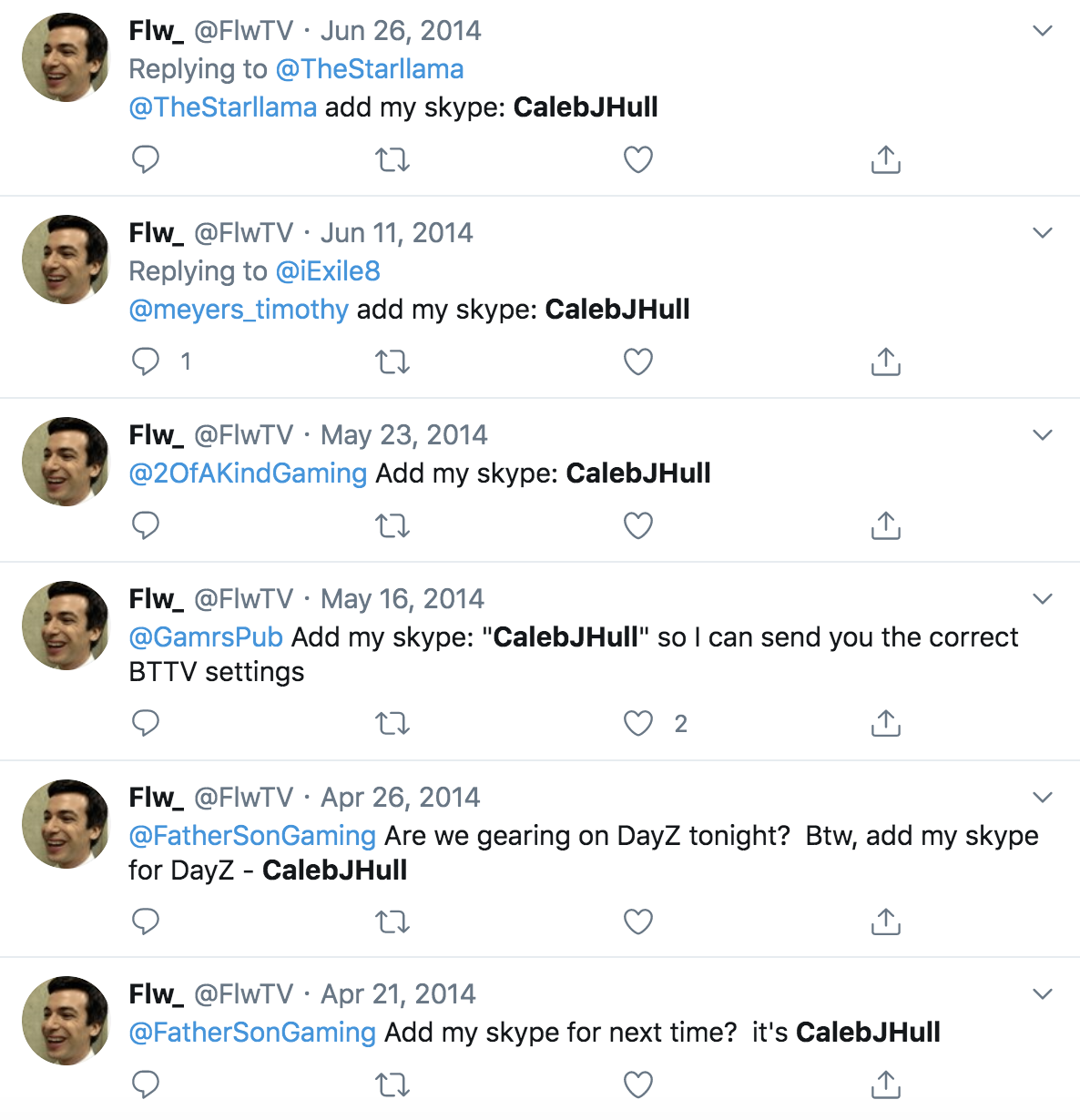 Mediaite has included only a selection of the offensive content that was found posted under Hull’s account @FlwTV, and other examples exist. Several of these tweets are directed to a popular African-American Twitch user known as “Avalanche,” including multiple n-word tweets and comments about picking cotton. 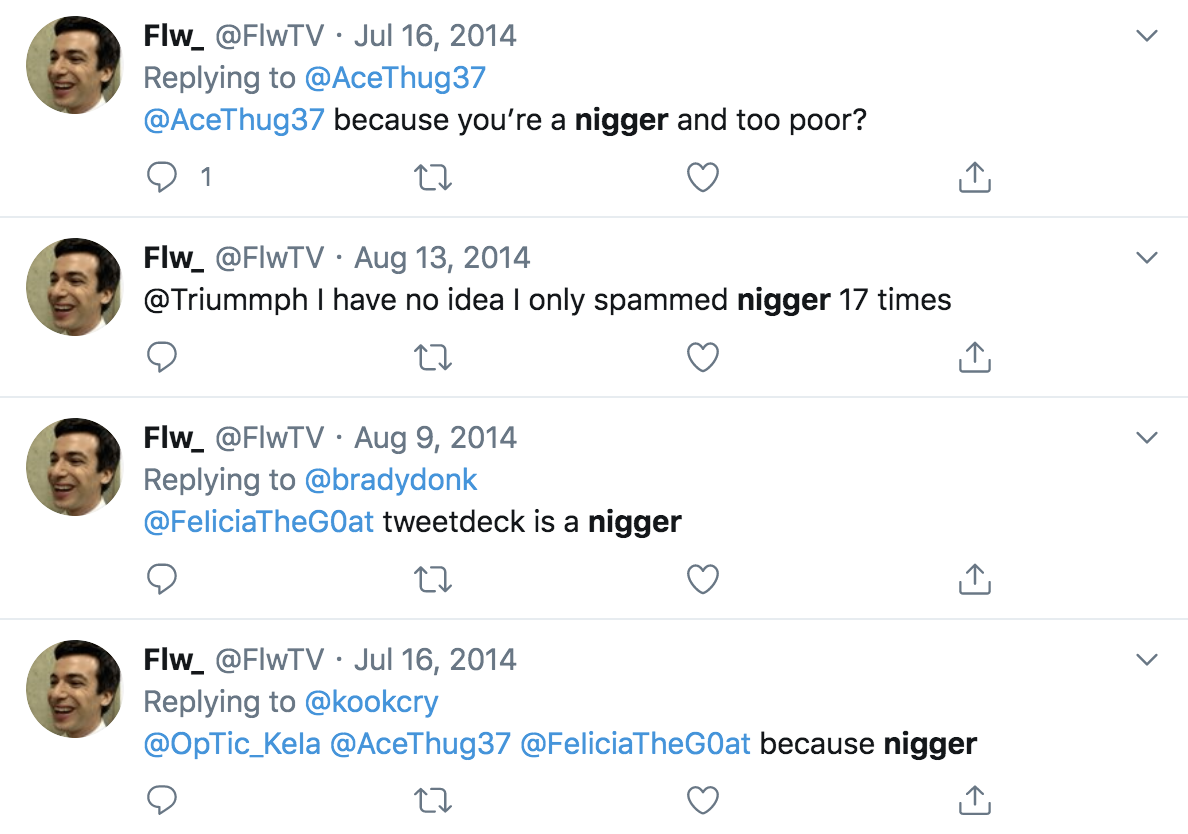 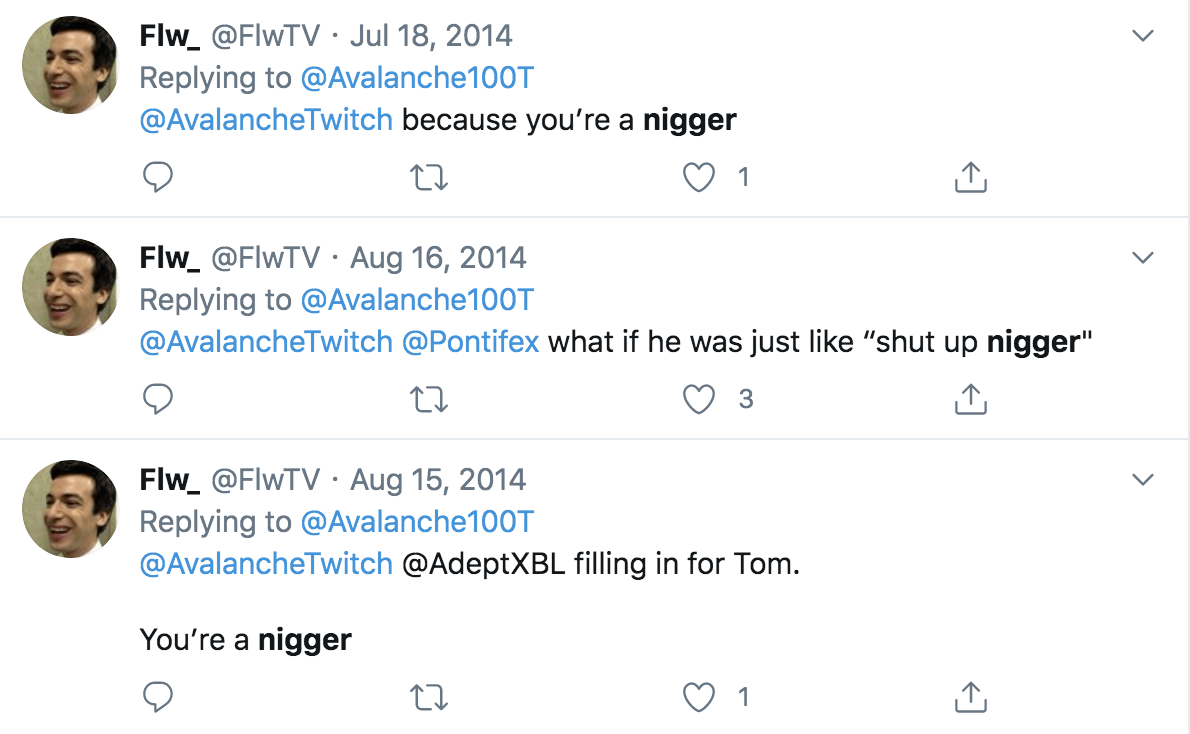 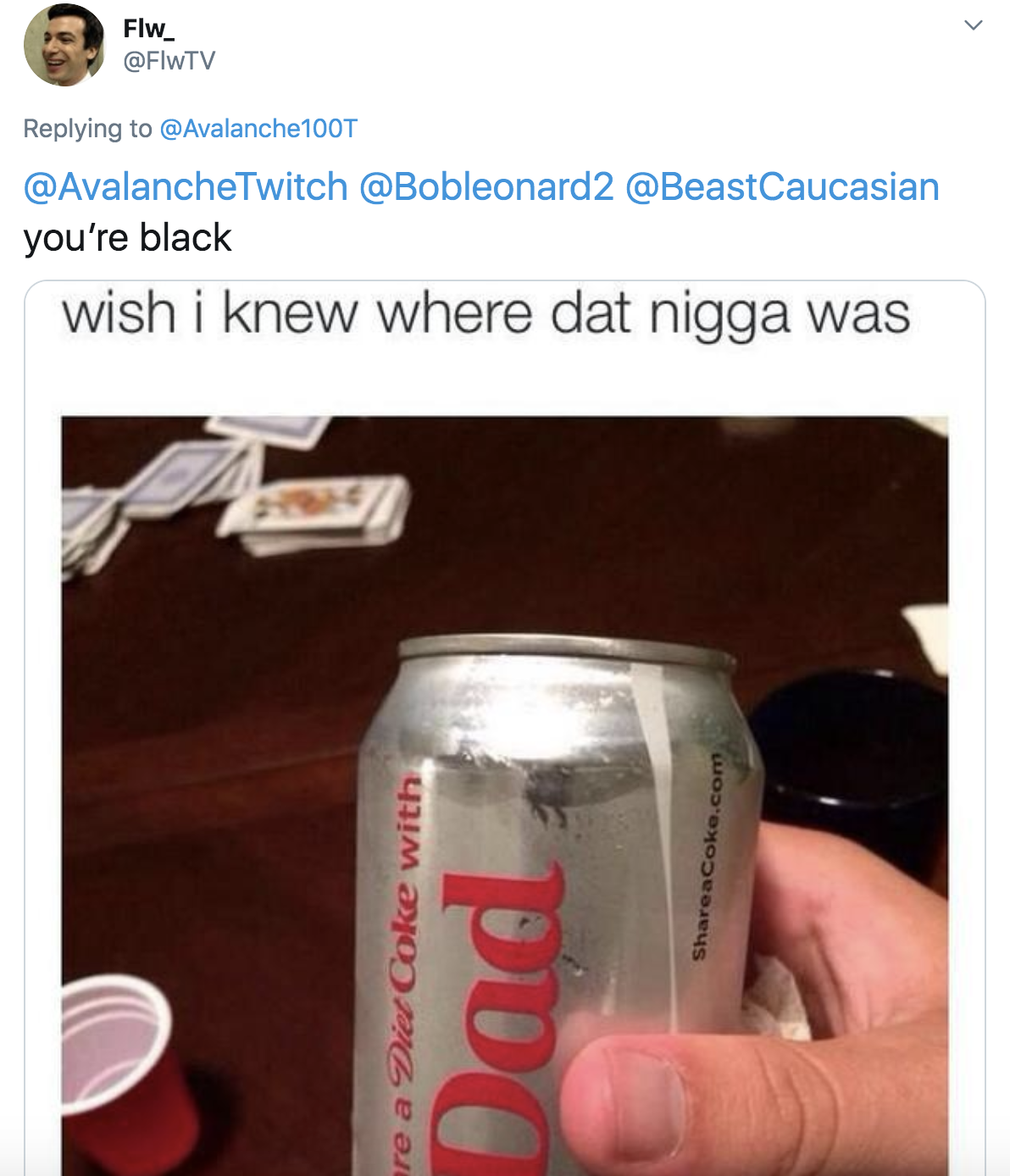 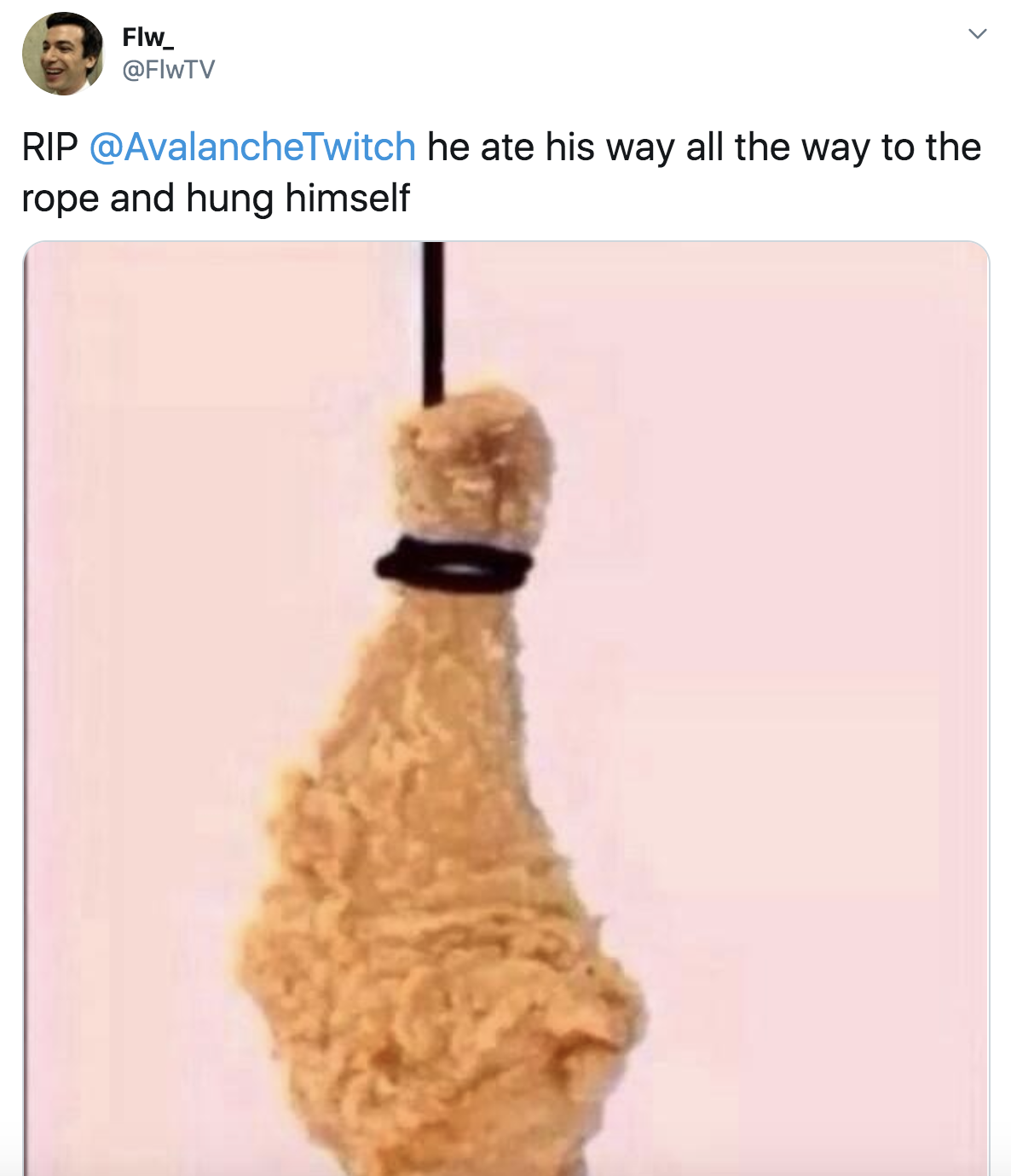 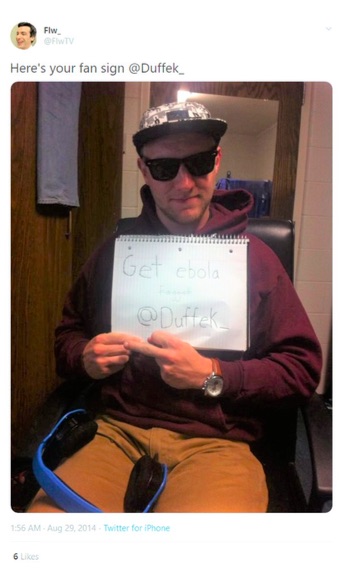 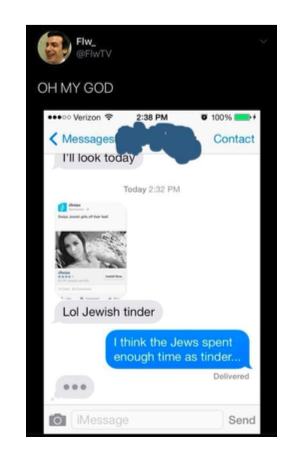 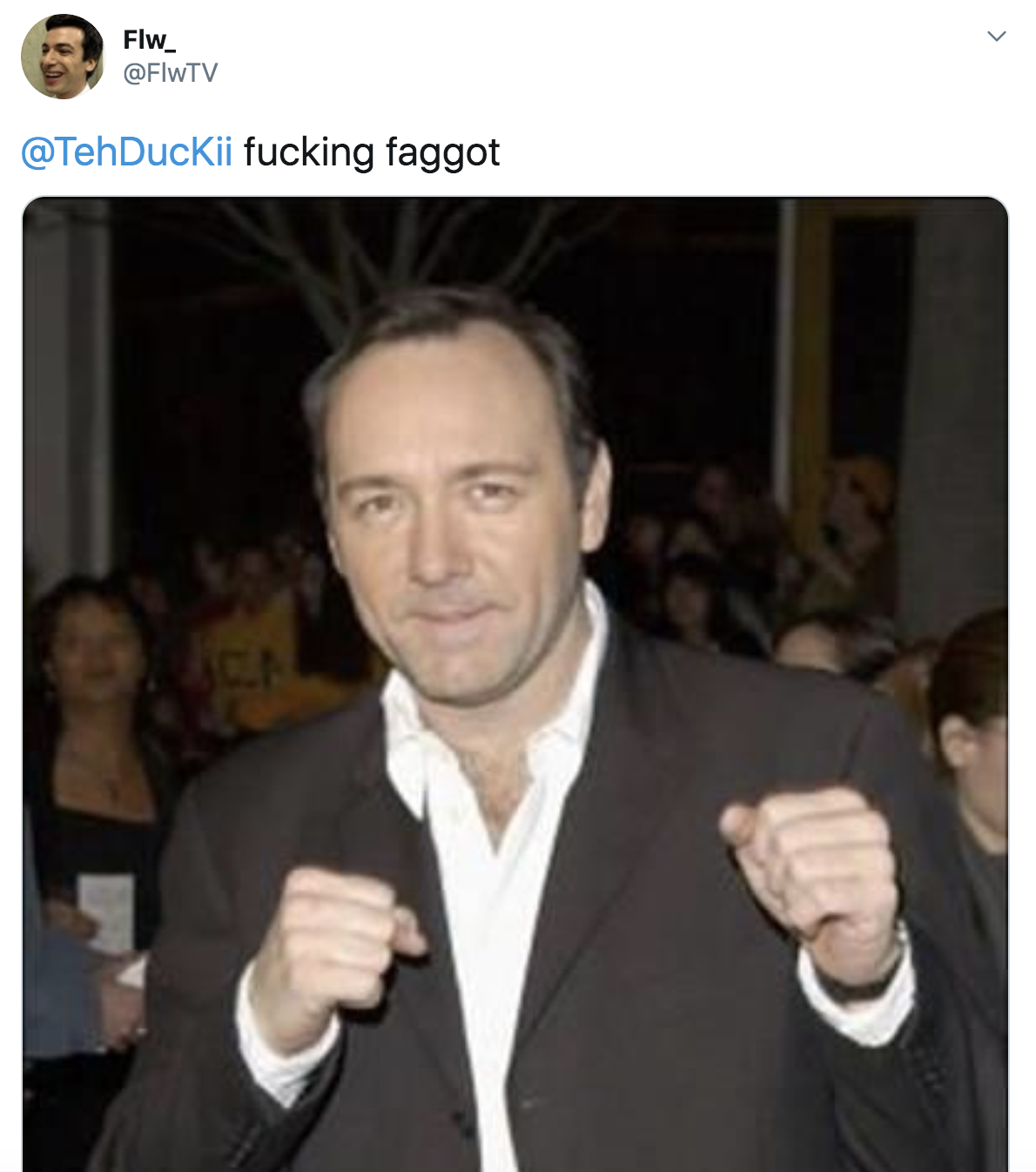 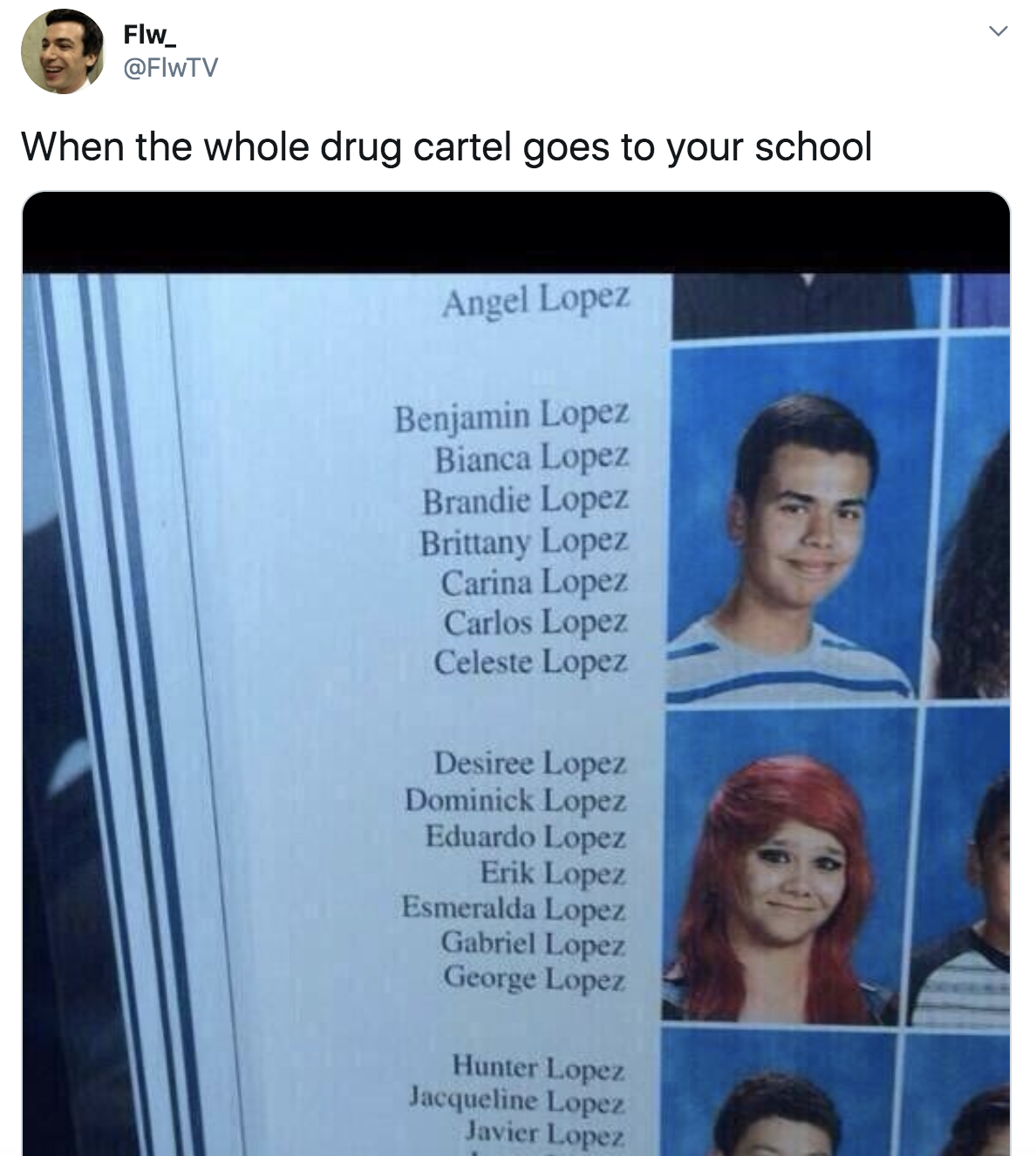 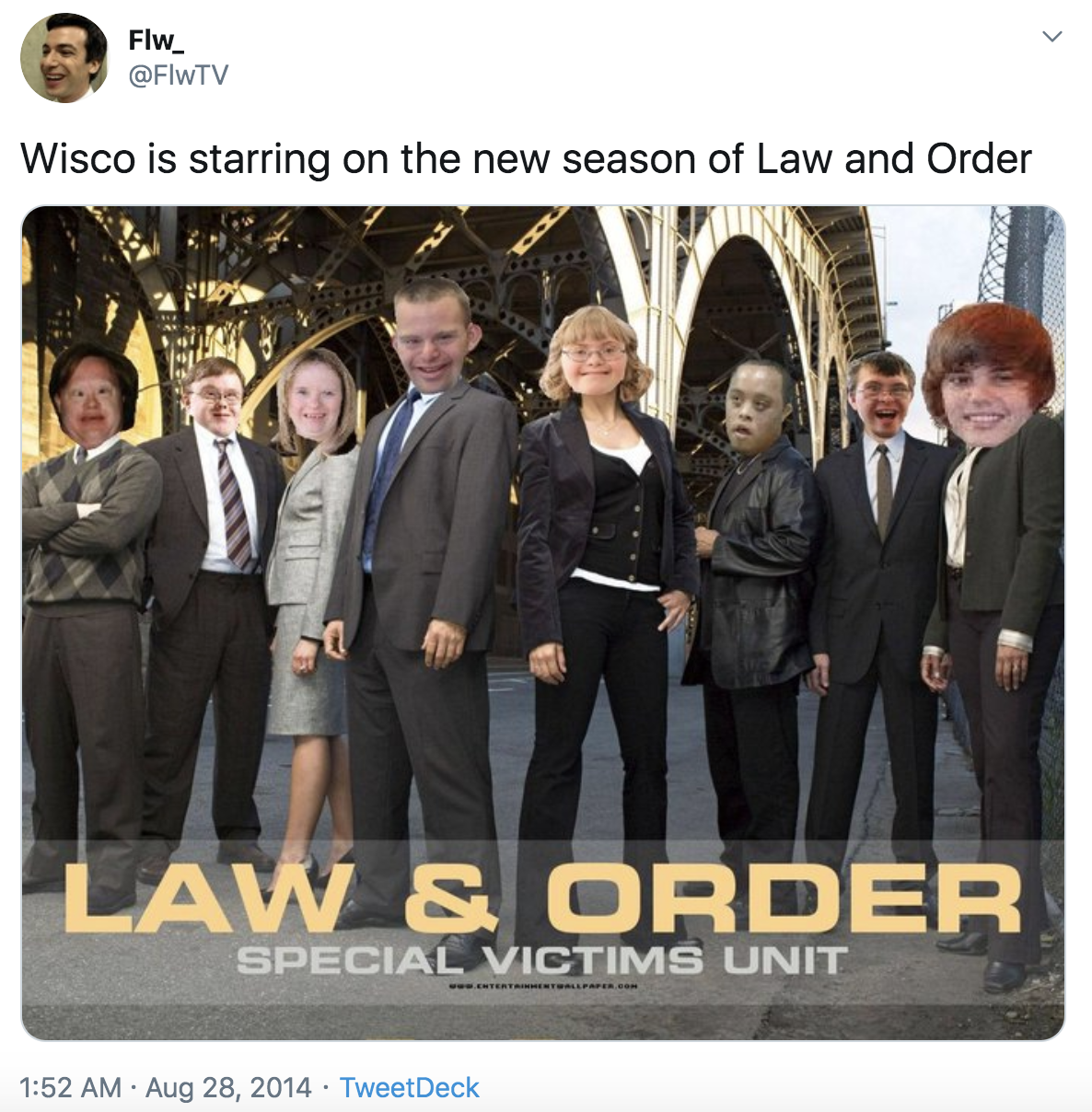 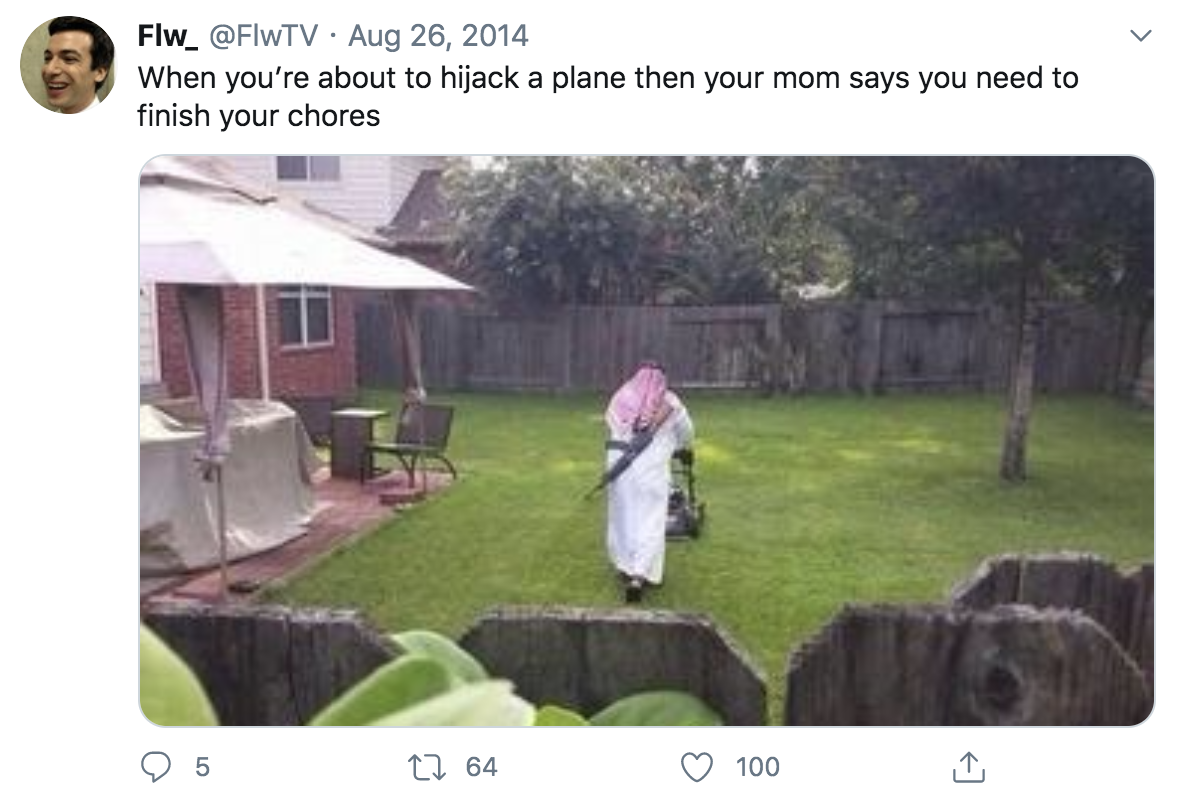 Until very recently, Hull was the content director for Targeted Victory, a DC-based consulting group that works on some of the most high profile Republican races around the country. He listed the company in his Twitter bio and elsewhere until about May of this year.

Reached for comment, a representative from Targeted Victory who asked not to be named told Mediaite that Hull and the company had “mutually agreed to part ways earlier this year.” They also confirmed that none of Hull’s offensive posts occurred while he was in their employ, they were unaware of these posts or his other accounts, and they “obviously do not condone” such content.

Mediaite reached out to Hull for comment but did not receive a response.

[Correction: this article originally said that Caleb Hull had criticized Bill Kristol for donating to a Democrat, Virginia Gov. Ralph Northam. The donation was actually made by Kristol’s wife, although Hull’s tweets did not reflect that fact.]