Rachel Maddow: The New Voice Of The Left, From Cable News To Capitol Hill

Rachel Maddow: The New Voice Of The Left, From Cable News To Capitol Hill 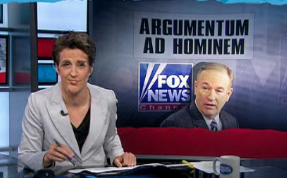 In his New York Times column last week David Carr notes that there have been times of late when it seems that the “Democrats picked up talking points from Rachel Maddow.” Carr places Maddow in a group that includes Rush Limbaugh and Sarah Palin, whom he describes as having “become an important source of political wisdom for many Americans.” While one suspects this is perhaps not company that Maddow would prefer to keep, it is interesting to see Maddow included in the upper echelon’s of media’s political heavy hitters.

Carr is not the first to single out Maddow. Last week 1960’s civil right activist Tom Hayden wrote in the Nation that during her recent trip to Afghanistan Maddow had missed her “Cronkite” moment. An interesting observation less because I agreed with his conclusion that Maddow did not ask enough tough questions, than because he felt Maddow could be reasonably compared to the giant Cronkite. Those are some very big shoes.

But both cases echo a sense I’ve had of late that Maddow has evolved from an entertaining MSNBC host to a preeminent and respected voice on the left. Judging by her growing ratings, her viewers appear to agree also.

In hindsight the shift perhaps began to be apparent back in March when then-Senate darling Scott Brown used Maddow as the villain in a an underhanded fundraising attempt. Of all the prominent figures on the left to employ as a scare tactic Brown opted for Maddow (whose days-long simultaneously scathing and humorous response Brown will likely not soon forget). Last week Marco Rubio attempted something similar. I am hard-pressed to think of a media figure on the left who has found themselves in a similar predicament (media figures on the right, meanwhile have been playing this role for quite sometime).

These are not the only radars Maddow has been popping on of late. Last week Fox News heavy hitter Bill O’Reilly devoted some prime time to her when he played a clip of her scathing comment criticizing Fox News for its Shirley Sherrod coverage, after which O’Reilly mocked ‘madame’s” ratings. Way back in February, Maddow got into a similar tit-for-tat with Glenn Beck. It’s clear the woman knows how to push the “right” buttons.

So, what is it about Maddow? I have some theories.

Rachel Maddow does not shout. Nor does she lecture. Nor does she project the sort of pretentious holier-than-thou sensibility that has marked Keith Olbermann‘s decline from the speaking-truth-to-power figure he was famously branded during the Bush years, to the cartoonish anchor who starts endless twitter fights whilst on vacation he has become. Nor does Maddow seem to gin up controversy, manufactured hysteria, nor unnecessary arguments with guests with an eye to ratings. In fact, Maddow’s interviews are generally civilized affairs, which often is what makes them so devastating: her interview with Rand Paul following his primary win in May was seen by many as a significant blow to the Tea Party movement. Which leads me to my second point.

She has a sense of humor.

Maybe this is obvious, but I think it’s key. And not just with Maddow. To my mind a sense of humor has lately been the common trait differentiating some very powerful media figures from the only sort of powerful; two people who jump to mind in that same category are Glenn Beck and Sarah Palin. And as all three have proved, a sense of humor can be a deadly weapon that when used well. It’s difficult to do damage to a person who’s more than willing to laugh along with the joke. The most recent example of Maddow’s ability to take a hit and turn it into a (damaging) laugh came in last week’s response to ‘Monsieur’ Bill O’Reilly shot are her ratings when she noted that both Spongebob Squarepants and Hannah Montana Forever left them both in the dust: “but even if no one watches us at all, except for my mom and my girlfriend and people who forgot to turn off the TV after Keith, you are still wrong on what really matters, and that would be the facts, Your Highness.” Which leads me to my next point.

This is not to say that other people on TV do not. But Maddow is unafraid to turn her bookiness into rollicking TV segments. She makes it a habit of talking up to her audience. Maddow’s excoriation of the Sherrod debacle, and Fox News’ coverage therein began with a longish survey of how, since the civil rights movement, politicians have used “scare white people” tactics as a way to gin up support. Last month she took a trip down to the Gulf to tour and explain how the oil spill would affect the fragile wetlands and the long-term damaging effects of this. As mentioned, earlier this month Maddow spent a week touring Afghanistan in order to “understand what [the troops] lives are like at war.” Brains attract brains.

She’s a new media mix of Big J and little c.
What I mean by that is this Maddow possesses the very enviable mix of cable personality and serious news persona. How many other cable TV anchors do you see pop up on Meet the Press (or any Sunday show for that matter) and not merely hold their own but outshine the host. She can do wonky just as well as she can do wacky. And more to the point, she can often to them together. (I’m still not convinced the biggest mistake NBC made was passing over Maddow to hand the MTP anchor seat to David Gregory.) What that often means in a media landscape that is getting increasingly hysterical is that Maddow can hold her own in the cable entertainment world, without relinquishing her grasp on the facts. If you’re looking for the future, this is probably a good place to start.