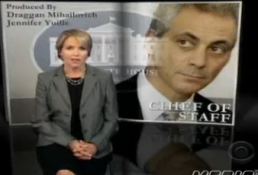 60 Minutes aired tonight what feels like the kajillionth interview/profile of White House chief of staff Rahm Emanuel. Boy does he look tired. Interestingly, the excerpt released yesterday in which Emanuel referred to the “fringe” element of the GOP did not make the final cut, so perhaps there is more to come online the sometime in the next few days. The interview contained the usual tropes: Emanuel’s aggressive style, his penchant for profanity (he never swears in the Oval Office), and the toll his job is taking on his family life (his kids get up at 5:15am so they can go swimming with him), his competitive relationship with his brothers Ari and Zeke.

Perhaps the most interesting thing to come from the interview — other than that Rahm has some sort of GPS device in his office to literally track all the movements of the First and Second families — especially in light of today’s epic vote on health care reform, is that Rahm thinks that Washington is working just fine. For real.

The process doesn’t trump the product…Washington can deal with these issues, if you didn’t think it could you wouldn’t get out of bed at five in the morning to go attack the day. I fundamentally believe America is set up to deal with this….Sometimes you will have differences and that’s not a negative.

Interesting, is so far as I never pegged Rahm as the glass half full type. But also reassuring, I guess, in so far as he doesn’t appear to be buying the hype. Also, in case there was any doubt (and lately there’s been plenty), Rahm’s “druthers are whatever the President wants.” Video of the exchange below. The part about Washington working fine starts at the 2:35 mark.