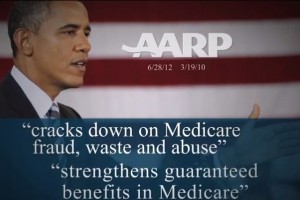 In the battle against the Romney campaign’s ill-advised attempt to make Medicare an issue in this year’s presidential campaign, President Obama‘s reelection campaign has just rolled out the big guns. In a new ad entitled “Facts,” the Obama campaign touts the American Association of Retired Persons‘ comments about the President’s plans for Medicare, and Paul Ryan‘s, which may or may not be identical or very different from Mitt Romney‘s.

The ad begins with the perfectly reasonable question “Mitt Romney’s attacking the President on … Medicare?”

The Obama campaign isn’t alone in their surprise. The Romney/Ryan lies about Medicare have been blisteringly debunked by everyone from CNN to…Fox News?

The ad also tales aim at the Ryan plan, noting that “AARP says it would undermine … Medicare and could lead to higher costs for seniors,” then references a study based on CBO estimates “And experts say his voucher plan could raise future retirees’ costs more than six thousand dollars.”

Plus, if you don’t believe the Obama campaign, you can check for yourself, as the ad encourages you to “get the facts” at MedicareFacts.com. Can you think of a better place to get facts about Medicare?

What makes the Romney campaign’s line of attack so mind-boggling is that Paul Ryan’s main claim to fame, the Paul Ryan budget plan, is understood by every non-Republican who looks at it as a plan that ends Medicare as we know it. Even in bestowing Ryan’s opponents the “Lie of the Year” award, Politifact acknowledged as much. Somewhere on Mt. Olympus, people are asking “Why is Achilles trying to kill that porcupine with his heel?”

Granted, Paul Ryan’s Medicare baggage made the Medicare issue unavoidable, but that doesn’t mean you just start leading with your face, and hope that the Obama campaign eventually faints at the sight of Mitt Romney’s brain matter all over their fists.

Here’s the press release that accompanied the ad:

CHICAGO — Mitt Romney continues to mislead the American people about President Obama’s record on Medicare – and skip the truth about his own plan to eliminate the guarantee of Medicare and provide people with a voucher to buy health care instead. To set the record straight, Obama for America is releasing a new television advertisement today titled “Facts” that cuts through the Romney campaign’s false and hypocritical attacks. Governor Romney cynically claims that Obamacare weakened Medicare solvency, when in fact the exact opposite is true. The President has extended the life of the program by nearly a decade. If Romney had his way, it would run out of money by 2016. The President’s health care law eliminates insurance company subsidies, and cracks down on waste and fraud in Medicare – saving $716 billion – and doesn’t cut a single guaranteed Medicare benefit. Congressman Ryan included the same savings in his budget, which Romney called ‘marvelous’ and said he’d sign into law.

The nonpartisan AARP says the health care reform law strengthens Medicare by extending its solvency and cracking down on fraud and wasteful subsides to insurance companies. And the AARP also said that the Ryan plan would undermine Medicare and could lead to higher costs for seniors. In fact, the Romney-Ryan vouchers would eliminate Medicare’s guaranteed benefits and could raise health costs by up to $6,400 per year. That’s hardly the formula for moving America forward.