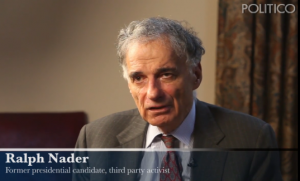 When it comes to foreign policy issues, Ralph Nader gives Barack Obama a lower grade than for George W. Bush. Nader said that Obama’s expansion of Bush-era drone strikes and other foreign policy measures are more concerning under the current president because Obama “raised expectation levels” about changing the status quo before his election in a way that Bush never did. Nader accused Obama of being a “war criminal” who is “violating [the law] with abandon.”

Patrick Gavin asked Nader if he believes Obama is one of the better or worse presidents in the span of the nation’s history. Nader put Obama on the bottom end of the scale.

Nader also accused Obama of being “politically selfish” in his speech at the Democratic National Convention, because he made it mostly about his own election and did not promote the election of Congressional Democrats.

But Nader’s harshest criticism of Obama came when the conversation turned to issues of military and foreign policy.

“He’s worse in the sense that he’s more aggressive, more illegal worldwide. He has basically stated… that he has the authority to kill an American citizen or citizens anywhere in the world if he suspects them of trouble.”

According to POLITICO, Nader also referred to Obama as a “war criminal.”

Watch the video below, courtesy of POLITICO: