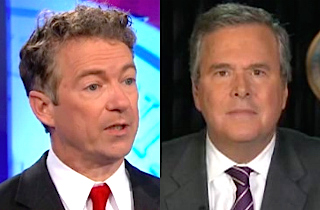 In a profile published by the Boston Globe this week, former Florida Governor Jeb Bush revealed that he smoked marijuana during his high school years at Phillips Andover Academy. Now, his potential 2016 Republican primary opponent Sen. Rand Paul (R-KY) is already using the report to accuse Bush of “hypocrisy.”

In reference to a Florida medical marijuana initiative Bush vocally opposed last year, Paul told The Hill, “You would think he’d have a little more understanding then.”

“He was even opposed to medical marijuana,” Paul continued. “This is a guy who now admits he smoked marijuana but he wants to put people in jail who do.”

“I think that’s the real hypocrisy, is that people on our side, which include a lot of people who made mistakes growing up, admit their mistakes but now still want to put people in jail for that,” he said of Bush. “Had he been caught at Andover, he’d have never been governor, he’d probably never have a chance to run for the presidency.”

As Florida prepared to vote on the ballot initiative that would have legalized medical marijuana in the state, Bush issued a statement, saying, “Florida leaders and citizens have worked for years to make the Sunshine State a world-class location to start or run a business, a family-friendly destination for tourism and a desirable place to raise a family or retire. Allowing large-scale, marijuana operations to take root across Florida, under the guise of using it for medicinal purposes, runs counter to all of these efforts.”

Bush urged residents to vote against the measure and it ended up failing to reach the necessary 60% supermajority threshold in the 2014 election.

Meanwhile, Paul has long advocated for an elimination of mandatory minimum sentences for drug convictions, and recently said in response to a question about his own use of marijuana that he “made mistakes” in college.