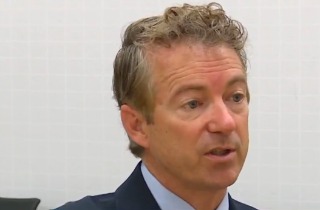 Back in 2010, the NRA gave Rand Paul an A on gun rights (though a qualified one), but now, days after Paul’s presidential announcement, they are not inviting him to speak at their annual convention this weekend. Why? Well, according to reports today, it all has to do with his affiliation with other gun rights groups.

Apparently, the NRA isn’t happy that Paul has publicly associated with groups like the National Association for Gun Rights, which denounces the NRA on its website as an “‘inside the beltway’ institutional gun lobby” and blasts their support of certain Democrats.

The group’s president has said it’s “no secret that Sen. Paul is more pro-gun than the NRA.” An NRA spokesperson told The Daily Beast that the Paul campaign didn’t reach out to them, though an unnamed source says that’s completely false.

Paul, meanwhile, told Bloomberg that this is exactly why the NRA’s unhappy with him. He touted himself as the greatest Second Amendment advocate in the Senate (though earlier this week he said the GOP should care about all the other amendments too), and said, “It probably looks a little bit petty for them not to invite a major candidate because I raised money for other Second Amendment groups.”