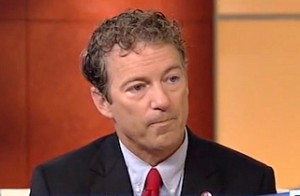 Remember for a few weeks last year when the media (Rachel Maddow especially) got on Senator Rand Paul‘s case about plagiarism? Well, he’s now stuck in another such controversy, in a bizarre case involving an attorney who wasn’t happy about being marginalized on the case and his spokesperson, who lit up over passages she said were lifted from his original suit.

The Washington Post‘s Dana Milbank spoke with the ex-wife and current spokesman for Bruce Fein, one of the suit’s original authors, and she claims that Paul lifted much of his original work after he was left out of the suit and Paul brought in Ken Cuccinelli, the former Attorney General for Virginia.

Fein… was furious that he had been omitted from the filing he wrote. “I am aghast and shocked by Ken Cuccinelli’s behavior and his absolute knowledge that this entire complaint was the work product, intellectual property and legal genius of Bruce Fein,” Mattie Fein, his ex-wife and spokeswoman, told me Wednesday. “Ken Cuccinelli stole the suit,” she said, adding that Paul, who “already has one plagiarism issue, now has a lawyer who just takes another lawyer’s work product.”

Milbank goes through example after example of passages that Fein originally wrote that were then taken, altered in minor ways, and then used in the lawsuit that Paul filed this week. A few people connected with the case have said Fein would be included later on.

After Milbank’s piece went up, Fein ended up releasing a statement saying his ex-wife was “not speaking for” him and denied any of it represented how he feels. But then Milbank went ahead and published the e-mails he was provided, in which it’s clear Fein is not happy with how he was marginalized in the process of working on the suit.

In one of the e-mails, sent to Paul’s top political advisor, Fein complains that “my name was not on the complaint” and he “was not included in any briefing [sic] of Rand about the complaint before filing and press conference today.” He goes on to say “my marginalization was thoroughly unfair” and says his name should be “on all future pleadings.”

Here’s one particularly contentious exchange between Mattie Fein and Cuccinelli, after Cuccinelli e-mailed her complaining about the lawyers becoming the story more so than the actual lawsuit.

If you have questions of me ask me directly. You basically stole bruces work product and research, there isn’t a press person friend or no in the world that believe you are a legal giant. You had an opportunity ,as well as that snake Stafford, to do the right thing…..you didn’t. What is your explanation for not being able to answer the numerous FISA suits…..lol I planted that because I know you are dumb as a box of rocks….make this right ken. You have no legal credibility….

I think this relationship is untenable. Your wife planted a question BECAUSE she believed it would do damage to our clients. Stated differently, she tried to hurt the clients.

I need to think long and hard about this going forward.

So, to sum up: Bruce Fein’s spokesperson is accusing Paul and Cuccinelli of plagiarism, but Fein himself is distancing himself from those remarks, despite the displeasure he expressed in e-mails how he was being marginalized on the lawsuit.