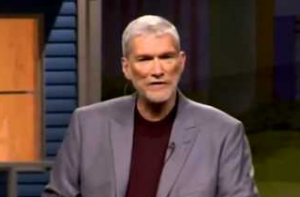 Ken Ham is a leading creationist who has built a life-sized ark that will soon be open to the public. We have covered him a few times before. He doesn’t believe in funding NASA since aliens will go to hell anyway. Even Pat Robertson cannot abide by everything Ham believes. Oh, and this is the guy who debated Bill Nye that one time.

He speaks out whenever someone in the public eye says they don’t agree with him, but yesterday he outdid himself when he used Twitter to try to stick it to people who don’t like his ark.

People tried to engage him, so he kept the tweets coming.

@aigkenham yes, because when my children disobey me I mercilessly drown them all.

@aigkenham In other words, if you’re God, it’s ok to drown people under certain circumstances. Don’t judge God! They had had it coming!

As you can see, secularists have been very busy. Secularists are the reason for all suffering.

Death, suffering and disease are not God’s fault, they’re our fault because we sinned against a Holy God who is the righteous God

The Ark opens to the public on July 7. Will you be heading to Kentucky for it?