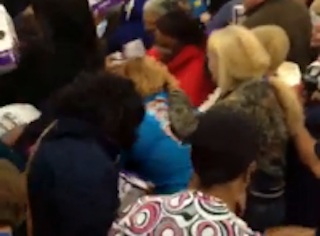 Alright, let’s break it down here. Y’know, shoot straight and talk honestly. There probably isn’t going to be any big news today. As much as it frequently seems otherwise, media folk are people too and all of them except for the unluckiest interns, the perpetually single, or the foreigners are at home today relaxing while content that was put together days ago fills the TV screens and web pages. Seriously, there’s a reason the New York Times is running a two page profile of Mitt Romney’s barber (Weirdest part? It’s actually pretty good). However, that does not mean you should step away from your computer screen. Definitely not! No, if you leave the warm glow of the Mediaite homepage, even for a second, you will be terrorized by insane shoppers. Don’t believe us? Watch this footage…

The video in question is from the Twitter user @HurrAKAneCam19 who early this morning (very early) tweeted that her sister “almost lost her life for a $2 waffle maker!” Some may not realize the seriousness of that statement. Despite HurrAKAne L’ing her A off, things really were crazy in the Walmart she was in and she proved it by filming some footage of the madness those waffle makers caused. The video was so disturbing, it soon was making its way up Reddit where it caught our eyes.

Watch below and remember that nothing like this will ever happen to you when you’re safe at home, reading Mediaite’s wonderful content, and continuing to give us traffic on this slow holiday weekend.