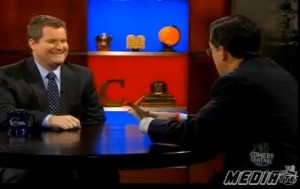 I heard that Redstate Chief Editor Erick Erickson was going to be on The Colbert Report (4 minutes before the show), I tuned in expecting to see copious nailage. The mixture of master satirist Stephen Colbert and hard-right loose cannon Erickson is a match made in nail heaven.

The outcome wasn’t what I expected, and at one point, I even found myself in agreement with the face of conservatism’s Markos Moulitsas.

Full disclosure: I am not the world’s biggest Erick Erickson fan, nor is he likely to send me a Happy Inclusive Omnidenominational  Holiday card. That said, I went into watching this interview with a fresh set of eyes.

Erickson made an excellent point about purity tests, arguing against them while arguing for purity. On either side of the aisle, the voters are the true crucible for any politician. Any dolt can sign a pledge.

I thought Colbert really had him on the ropes, though, when he went to Erick’s twitter feed for 3 choice nuggets.

“You said of Justice Souter that he was a goat-f***ing child molester,” came the first volley. “You said that Linda Douglass was the Joseph Goebbels of healthcare, and you said of Nobel Prize winner Barack Obama ‘I did not realize the Nobel Committee had affirmative action quotas.”

Colbert never did circle back on the affirmative action thing, but Erickson handled the other two well. On Douglass, he actually provided context that changed the meaning of the offending tweet, saying that he was responding to Douglass’ statements that opponents of healthcare reform were like brownshirts. While I wasn’t able to find any record of Douglass having made such a remark, his larger point, that Godwin-esque rhetorical excess reigns on both sides of the aisle, stands. Basically, he wasn’t calling Douglass a Nazi, he was satirizing other people’s Nazi comparisons.

On the Souter tweet, he did something truly remarkable, something that not even Arthur Fonzarelli could do: He said he was wrong. That’s something we could use a little more of these days.

Finally, Erickson’s point about the Tea Party movement was dead on, and one I’ve been trying to make for a long time. The people who show up for Tea Party protests are a far cry from the umbrella groups who are out to exploit them.