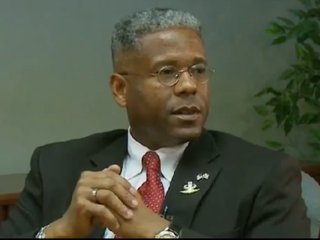 Rep. Allen West has made a bold statement in the defense of LGBT rights, sort of. The Tea Party-backed Republican Congressman known for some controversial views explained local paper South Florida Sun-Sentinel that he believed that “everyone has the same basic rights,” but “people can change their sexual behavior” like any other behavior, not that he wanted them to do that.

“I can’t change my skin color,” he explained to an off-camera interviewer, “[but] people can change their sexual behavior– I’ve seen people do that.” He explained that, growing up in Georgia, he had a “very different perspective on human behavior” that made him believe homosexuality was a choice. That said, he didn’t think it was a choice that should limit the rights people have in society.

“Everyone has the same basic rights, and no one is telling people in the gay community that they don’t have the same basic rights that any American has,” he noted. What’s more, he elaborated that while he believed it to be a choice, he did not think it an inferior one that should be changed. “No, I don’t think that!” he cried upon being asked. “I like chocolate chip ice cream,” he said by way of analogy. “I will continue to like chocolate chip ice cream, there’s no worry about me changing to vanilla.” He’s not about to trade in his motorcycle for a scooter, either, because “I’m not into that.”

Not exactly the sort of riveting progressive statement the LGBT community is used to, nor did Rep. West explain how those beliefs translate to his position on gay marriage– or when he chose to like chocolate chip ice cream.

The clip from the Sun Sentinel below: