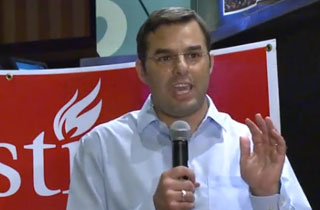 Republican Congressman Justin Amash won his primary last week, and gave a pretty fiery victory speech that was in no way gracious to an opponent that called him al-Qaeda’s best friend. And today Amash responded to people––including some high-profile cable news pundits––who tsk-tsked him for being so negative in that very speech.

The Grand Rapids Press ran an editorial last week saying he should have taken the high road. Today, they gave Amash space to respond. Amash says the negative attacks on him were particularly nasty, particularly an ad in which baby girls were yanked from their cribs, the subtle message being, Amash believes, an accusation that “a pro-life father [is] allowing the murder of baby girls.”

RELATED: Hoekstra Responds to Amash Burn: He’s ‘Entitled to His Own Opinions’

And so all of that is why Amash felt compelled to stand up.

I do know that if we want healthier, more civil politics that reflect the values of our community, such over-the-line smears must end.

How do we ensure that candidates understand that there is no place for such venom?

We start by standing up to the bullying. We acknowledge that the tactics crossed the line and won’t be tolerated in our community. And we do so publicly, with the honesty and candor that so often is missing from our disingenuous political discourse.

And you can watch Amash’s fiery speech here, via WXMI-TV: