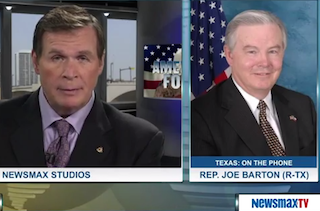 Leading up to the midterm elections, House Speaker John Boehner (R-OH) did his best to keep any rumblings about Republicans trying to impeach President Barack Obama under wraps, at one part calling any impeachment talk a “scam started by Democrats at the White House” aimed at rallying the liberal base. But now that the GOP has succeeded to taking over the Senate, it looks like “impeachment” is no longer a dirty word.

During an interview with Newsmax TV on Monday, Rep. Joe Barton (R-TX) was asked to respond to a recent article by Andrew C. McCarthy in the National Review that urges Republicans to issue a “credible threat of impeachment” in order to stop Obama from “granting amnesty to millions of illegal aliens.”

“Well impeachment is indicting in the House and that’s a possibility,” Barton said in response. “But you still have to convict in the Senate and that takes a two-thirds vote. But impeachment would be a consideration, yes sir.”

On the Senate side, Sen. Rand Paul (R-TX) has stopped short of calling for Obama’s impeachment, but he did make the case in a Daily Beast post Monday that the president’s war against ISIS is “illegal.” He wrote, “This war is now illegal. It must be declared and made valid, or it must be ended.”

In both cases, with the fear of energizing Democrats temporarily suspended, Republicans are once again starting to become comfortable with threatening impeachment, whether explicitly in the case of Barton or implicitly in the case of Paul. The next time someone asks Speaker Boehner or soon-to-be-Senate Majority Leader Mitch McConnell about Republican plans to impeach Obama, they may have more trouble labeling it a Democratic “scam.”

Watch video below, via Newsmax (impeachment talk starts at 4:30):