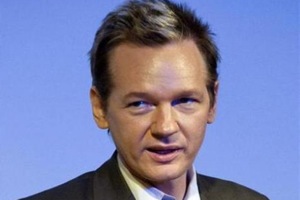 Wikileaks is going all in on their quantity-over-quality strategy. The enigmatic online intelligence operation has been teasing a massive leak seven times the size of the Iraq War Logs recently and, with a week expected in between the Thanksgiving break and the big revelation, Reuters is reporting the new documents could be related to corruption among foreign diplomats.

Reuters spoke with some anonymous sources in the State Department who have access to the documents, who argue the documents will potentially harm the image of not just U.S. diplomats, but foreign dignitaries of other large nations:

Among the countries whose politicians feature in the reports are Russia, Afghanistan and former Soviet republics in Central Asia. But other reports also detail potentially embarrassing allegations reported to Washington from U.S. diplomats in other regions including East Asia and Europe, one of the sources familiar with the WikiLeaks holdings said.

The U.S. government is already turning wheels to minimize the damage of the new leak. State Department spokesman P.J. Crowley, commenting on Wikileaks’ future release, “decried” the work and noted that, while “we wish that this would not happen but we are obviously prepared for the possibility that it will.” In Wikileaks speak, this translates to the Pentagon “hyperventilating” over their work.

Wikileaks is also attempting to expand its large media net, with reports coming in that the group is attempting to involve Spanish newspaper El País and French newspaper Le Monde in the operation– in addition to the New York Times, the UK’s the Guardian, and Germany’s Der Spiegel, all of which participated in the Iraq War Logs release earlier this year. None of the media outlets, however, are giving in on any information. The Times, the only newspaper to respond to Reuters’ request for comment, declined to talk about the leak other than to note that they will comment on it when they release it– so best to enjoy a carefree Thanksgiving holiday and keep nightmares of Julian Assange‘s secret files on the back burner for now.