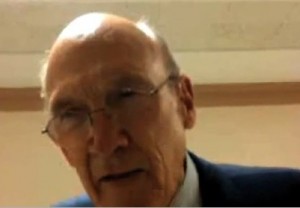 At almost the same exact time as BP Chairman Carl-Henric Svanberg’s “small people” remark, an eerily similar gaffe was taking place just across town. Former Senator and Deficit Commission Co-Chair Alan Simpson got into an impromptu, on-camera debate over social security, and repeatedly referred to its recipients as “lesser people.” Now, some are calling for Simpson’s removal from the commission. I asked Robert Gibbs about it at yesterday’s White House briefing.

Simpson’s comment was arguably much worse, since he didn’t have a language barrier to grapple with, and his target was pretty much everyone in the US. Here’s the full interview, conducted by Alex Lawson, Communications Director for Social Security Works: (the “lesser people” comments occur within the first minute, but watch the whole thing for the real story here)

I also find it interesting that, aside from the BP “small people” gaffe, there are also echoes of “ambush” interviews of Helen Thomas and Bob Etheridge here. Simpson, like Helen, is at an age where he’s less likely to be concerned with the niceties of language. While it comes off badly in the “lesser people” remarks, the overall effect is refreshing, as Lawson notes in the video. Unlike Bob Etheridge, Simpson hangs in there to engage someone with whom he disagrees.

I also find an amusing contrast in style here, between the simplistic, bumper-sticker approach of the two “students” who approached Etheridge (“Do you fully support the Obama agenda?”), versus the more substantive, but less sound-bite friendly, technique of the liberal activist.

So, should Simpson step down? Certainly not for his “lesser people” comment alone. As most supporters of the system acknowledge, Social Security has lifted millions of Americans out of poverty, an idea which Simpson may have been trying to express, however inartfully.

However, as Paul Krugman points out, Simpson just doesn’t know what he’s talking about. He’s using the same talking points that the Bush crowd did in their failed attempt to privatize Social Security. While it is a free country, and Simpson has every right to his opinion, should his hostility toward Social Security (based on faulty assumptions) disqualify him to lead the deficit commission?

The White House has a full plate right now, but hopefully, they get around to answering that question before too long, before millions of the “lesser people” have to start wishing they could get their lives back.