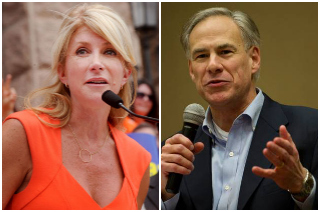 Not long after Red State’s Erick Erickson called Wendy Davis an “abortion Barbie,” a Texas Republican doubled down on his insult, calling her a “retarded Barbie” on Saturday, and boasting that Texas gubernatorial candidate Greg Abbott would trounce her in a campaign. Abbott, currently the Lone Star state’s attorney general, tweeted a thanks of support to the strategist, before quickly backtracking from it.

“That Greg Abbott would thank a supporter for calling Senator Wendy Davis a ‘Retard Barbie’ is absolutely disgusting and disturbing. This is what Republicans think about women—that a Harvard law school graduate, State Senator, and a long time fighter for Texas families deserves such inappropriate slander. Greg Abbott endorses such disrespect. The people of Texas deserves so much better than this from their public officials. And the women of Texas deserve leaders who respect them as human beings.”

Abbott tried to disassociate himself from the comment, but stopped short of apologizing:

Dear Libs – I use RETARD to describe irony of your distortion of progress; I know you don't understand – just makes it more fun! #TGDN #tcot

Retard = to slow development or advancement…this is why I use this word to describe libs. No so progressive now, huh? #TGDN #tcot

Libs hate the word retard so I going to use it ALL DAY! To describe libs…who ARE retards. I do not fold to PC censors. #TGDN #tcot