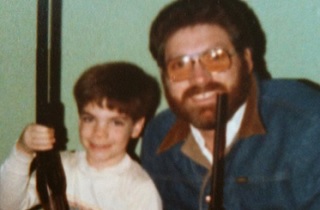 The accidental shooting death of two year-old Caroline Sparks, at the hands of her 5 year-old brother, has focused attention on the marketing of deadly firearms to very young children, and led to strong denunciations from liberal pundits. At least one conservative pundit, The Daily Caller‘s Matt Lewis, has used our revulsion at this marketing strategy to suggest that such critics are insufficiently masculine to understand the deep mysteries of a gun culture that puts deadly weapons into the hands of toddlers, a gun culture that must be completely alien to “effete liberal p*ssies.”

Matt Lewis and I go way back, and in addition to a reservoir of personal and professional goodwill, I’ve always found him to be among the more reasonable conservative pundits. The debate over gun reform, however, appears to be a notable exception. Not long ago, Matt came out against background checks, and now, is pushing the idea that 5 year-olds with guns is a normal part of gun culture. It may, or may not, be prevalent, but as Matt’s own column seems to prove, there’s nothing normal about it. After suggesting that newsrooms should “hire a few journalists who aren’t effete liberal p*ssies,” Lewis gunsplains it all:

Reportedly, a five year old boy who was left alone with his first rifle, accidentally shot and killed his two-year old sister. As a father, this breaks my heart. But because I understand what has come to be known as “gun culture,” my first instinct isn’t to politicize the tragedy in order to push more gun control.

You see the picture above? That’s me on the left. My dad (at the time, a prison guard in Hagerstown, MD) is on the right (give him a break on the glasses, it was the 70s.) Granted, those were probably just BB guns I got for Christmas (maybe Red Ryder bb guns?). There were real guns to come. But here’s the thing, they were always used responsibly — and there was always supervision.

Lewis then singles out “urban colleagues” like MSNBC’s Chris Hayes and The Huffington Post‘s Amanda Terkel as the aforementioned “effete liberal p*ssies,” who “might not get it,” and adds that “The reason I can decry gun violence and mourn the tragic loss of a child — without finding a picture of a boy with his first gun to be repellent — is that I was country when country wasn’t cool.”

I can’t vouch for the relative p*ssydom of Chris Hayes (although in barrooms around Brooklyn, I’m told Hayes is referred to in hushed tones as “The Solar Panel,” because if you get in his way, he’ll put your lights out), but since I agree with Hayes more than Hayes does, I’m going to assume that Matt’s talking about me, too. I’ll leave judgments about effeteness and p*ssitude to others, but I dispute the notion that mainstream gun culture is some impenetrable cultural fortress that only Matt Lewis can understand.

Granted, I didn’t grow up in the badlands of Maryland, but my own formative years included interactions with guns that are probably fairly typical, and miles away from the “Eek! A mouse!” view that gun enthusiasts like Lewis have of liberals. One such series of interactions applies well to this issue.

For years as a youngster, I attended a fundamentalist Christian summer camp in rural Pennsylvania, a privilege that I earned every year by memorizing hundreds of Bible verses. The focus of camp life, aside from Christian devotion, was outdoorsmanship, and among the many activities (hiking, fishing, the detailed examination of deer droppings) were archery and marksmanship. The camp had a rifle range, at which I consistently earned the camp’s top honors. As Lewis notes, the first, second, and third priorities on the range were always safety, and even the slightest bit of carelessness was dealt with strictly. These were useful lessons in responsibility, all given under scrupulous adult supervision.

But there was another interesting thing about the camp’s rifle range: campers under the age of 12 were only allowed to use BB guns, like the one Matt’s holding in that picture. You had to be 12 or older to use a real .22 rifle, like the one that killed Caroline Sparks, and the one a New Jersey 4 year-old used to kill a 6 year-old friend a few weeks ago. Aside from the younger kids, who were characteristically anxious to do what the big kids could do, no one questioned this; none of the parents protested this assault on liberty. It’s a rather simple thing to understand that, even with supervision, a younger kid was more likely to have an accident, and more likely to survive it with a BB gun.

That seems to be a principle that Matt Lewis’ folks understood, since they gave him a BB gun when he was, what, seven or eight years old, and some time later than that, real guns. We can have a discussion about the wisdom of allowing a five year-old to possess a deadly firearm, but it’s unfair for Matt to disqualify anyone from that conversation on the basis of an alleged norm that he, himself, never experienced.

For that matter, it’s not even fair to exclude actual effete liberal p*ssies from the conversation, and not just because they’re Americans, too. Matt’s right, there is almost no activity whose risk cannot be somewhat mitigated by responsible adult supervision. The question then becomes, to what degree is it being mitigated? A few weeks ago, a 4 year-old shot and killed his aunt in a room full of adults, including a sheriff’s deputy who was also a school resource officer. A cold-hearted person could read Caroline Sparks’ death as a risk that her parents assumed by purchasing the weapon, a risk that parents ought to have the right to take on behalf of their own children, but it becomes a different conversation, entirely, when that risk is assumed on behalf of someone else’s child.