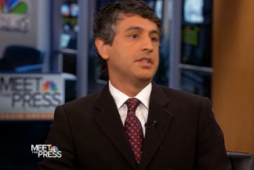 More like this please. Yesterday Meet the Press made a rather inspired addition to their normally staid Beltway roundtable line-up: Reza Aslan made his debut on the Sunday morning show to talk about the growing anti-Muslim sentiment in the country. Regular watchers of the Daily Show will be familiar with Aslan from he frequent appearances over there, but it was a refreshing change to have his voice added to Sunday conversation, and he did not disappoint.

Aslan, who recently authored the book ‘Beyond Fundamentalism: Confronting Religious Extremism in the Age of Globalization,’ began the roundtable discussion with a bang: “I do want to remind everyone that in this country we do not define our constitutional rights by how they disturb people’s sensitivities–you only had to spend a few minutes at Ground Zero yesterday and to take in this international cabal of anti-Muslim zealots that had gathered together to spout the most vile racist bigotry to know that this is about something more.”

The “something more” says Aslan is simply Islamophobia:

Anti-Muslim sentiment in this country is at unprecedented levels. We all know this. But what’s truly disturbing is how mainstream it’s becoming with politicians on both sides–and I would have to include the former mayor [Giuliani] in this, in this category–openly and explicitly associating American Muslims with al-Qaeda. But let’s call a spade a spade for a moment. If you are painting 1.5 billion people with the same brush of violence and, and, and extremism, you’re a bigot. And I think what’s, what’s disturbing is the way that that’s become part of the, the, the natural discourse now.

Sadly, Giuliani was not present for this segment of the show or we might have been in for some quality fireworks. Meanwhile, Reza’s remarks (alas, Gregory did not return to Aslan much after this, perhaps so much frank discussion at once threw him off) were some of the more relevant I’ve heard on MTP in a while and one can only hope it signifies a decision on their part to cast a wider net when it comes to choosing upcoming roundtable guests…and not just a token one-off. Clip below.