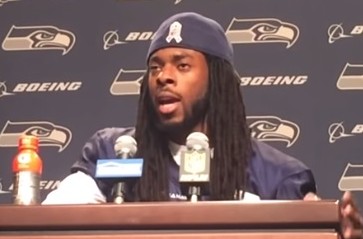 Seattle Seahawks cornerback Richard Sherman went on a long and insightful monologue about the #BlackLivesMatter movement during a press conference, saying he supported its goals but thought black-on-black crime should be addressed first.

Sherman made the comments after being enraged to find pictures of him being spread on the Internet supporting violence against police officers. “I don’t think any time’s a time to call out for an all-out war against police or any race of people. I thought that was an ignorant statement,” he said.

“As a black man, I do understand that black lives matter. You know, I stand for that, I believe in that wholeheartedly,” he said. “But I also think that there’s a way to go about things, and there’s a way to do things.”

Sherman spoke candidly about growing up in the inner city and watching his best friend die at the hands of two other black men. “Wasn’t no police officer involved, wasn’t anybody else involved, and I didn’t hear anybody shouting ‘black lives matter’ then.”

“We need to deal with our own internal issues before we move forward and start pointing fingers and start attacking other people,” he said. “We need to solidify ourselves as people and deal with our issues, because I think as long as we have black-on-black crime and, you know, one black man killing another … if black lives matter, then it should matter all the time.”