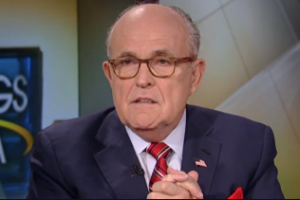 Rudy Giuliani really didn’t appreciate that Newt Gingrich helped to fuel the recent speculation that Donald Trump‘s campaign is in disarray by saying there’s a plan for an “intervention.”

The former New York City mayor appeared Thursday on Mornings With Maria, where the panel discussed the murmurings that Trump’s allies and campaign staff are becoming increasingly frustrated with the brash candidate. Giuliani said the reports of a meeting began because his fellow Trump endorser, and he said Gingrich was “completely out of line” to comment on things the way he has.

“Honestly, I love him dearly, but I think that word was used by Newt in a memo that got around,” Giuliani said. “What a ridiculous word.”

Giuliani elaborated that calling the reported meeting an intervention makes no sense because interventions are for alcoholics and drug addicts.

“Donald Trump doesn’t drink or smoke, by the way. We don’t have that problem,” Giuliani said. He went on to say he takes part in regular campaign meetings to discuss the next stage of it “evolution,” and that such recalibrations are not out of the ordinary.

Gingrich and Giuliani were also rumored to be joined for the proposed meeting by Reince Priebus. the RNC Chairman has also reportedly expressed his own fury that Trump keeps walking into controversies, refuses to support allies who critiqued him, and repeatedly loses his focus on Hillary Clinton.