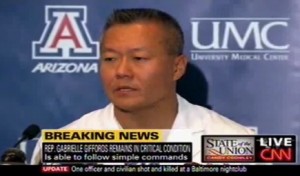 The right-wing blogosphere is classily playing “Gotcha!” with President Obama‘s uplifting revelation, at last night’s Tuscon Memorial Service, that Rep. Gabrielle Giffords “opened her eyes for the first time” shortly before the memorial. A report originating at Gateway Pundit, and currently circling the globe, alleges that “It Looks Like Obama Fibbed” about the milestone in Giffords’ recovery, and of Obama’s revelation, “unfortunately it was not true.”

First of all, as the President said in his speech, he was relaying information given to him by Giffords’ husband, astronaut Mark Kelly, so even if Gateway Pundit’s reporting was rock-solid, it is Kelly they’d be calling a liar, not the President.

But their assertion that the President “fibbed” is based on “evidence” that is suspect on its face:  (from Gateway Pundit)

The Sonoran Chronicle reported that Rep. Giffords could open her eyes on Sunday. (The Sonoron has since pulled the article.)

Originally, this was all Gateway Pundit’s Jim Hoft needed to run with the story that the President lied during the most solemn occasion in recent memory: a snippet of a news article that had been deleted from publication (cached version here). Why would someone run with a story like that? Because obviously, Obama and Giffords’ husband must have leaned on The Sonoran to cover their sinister tracks. You think I’m kidding?

Would someone please tell me this was not planned.

Yes. This was not planned.

Here’s a clip from Sunday’s press conference that the deleted article references, in which the doctor they indirectly quoted says that Giffords cannot open her eyes:

Hoft updates his post later, after apparently scouring the internet for another snippet to backstop his thin report:

More… The Tucson Sentinel also reported that Gabby could open her eyes in their Tuesday article.

True, the Sentinel does contain an indirect quote that indicates this, followed immediately by the exact opposite:

Giffords cannot speak because she is on a ventilator, and cannot see because of the area of her injury and the surgery requires her eyes be kept closed, the doctors said Monday.

I consulted with a trauma surgeon, who verified that after the surgery, she would have been in a medically-induced coma, and that as they pulled back on the meds, the timing for her to open her eyes (if she could) would have been around Wednesday.

It’s one thing to notice something in a news report that contradicts a statement by a politician, but to press the issue based on a deleted news item and a self-contradictory one, without checking, just to score some political points, goes beyond cynicism.

Update: ABC News’ Jake Tapper has more on this:

But doctors today provided a simple explanation: Wednesday was the first time Giffords opened her eyes on her own, which Giffords’ neurosurgeon, Dr. Michael Lemole Thursday called “a major milestone.”

…The president’s remarks were meant, the White House says, to convey that she had opened her eyes on her own for the first time.

Update 2: Hot Air’s Ed Morrissey also debunked this story, so there are responsible conservative blogs, too.