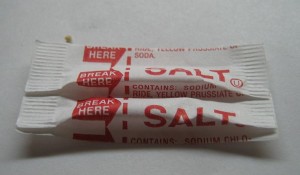 According to a recent Washington Post report, the Food and Drug Administration is finalizing a plan to reduce the amount of salt in processed foods, one which will eventually include legal limits on the delicious mineral.

Of course, this prompted right-wing sites like Hot Air and Redstate to collectively cry, “…from my cold, dead, perfectly-seasoned fingers!”

Is this really an assault on liberty? Does NaCL need the ACLU? Or is this knee-jerk “nanny state” bleating just pure sel-fishness?

Ed Morrissey points out that this is all about the ability to choose for ourselves:

The FDA has never interjected itself into the recipes of prepared foods.  Instead, they have enforced full disclosure on labels, allowing consumers to select the healthiest options for themselves if they wish.  Why the change?  The FDA says we can’t choose for ourselves.

I have a few problems with this attitude. First of all, a lot of Americans really can’t choose for themselves. Most American children, for example, don’t have the option of sending their meals back to the kitchen if the sodium level is too high. On top of that, most of the food dispensed at food banks, out of necessity, is in the form of canned goods that are much higher in sodium than their non-processed counterparts.

While Ed and I are perfectly capable of hitting the Whole Foods produce section whenever we want, children and poor people are much more limited.

He then cites a study that seems to suggest that it’s low sodium diets that are the health risk. In the middle of that study, though, is this pretty important disclaimer: (emphasis mine)

So, once you eliminate everyone who was killed by salt, it turns out salt is just dandy. There’s also this comforting disclaimer:

Since NHANES III was an observational study and not a clinical trial, no definite conclusions about cause and effect were possible, says Dr. Cohen.

Meanwhile, Redstate’s Moe Lane equates this with an “attack on bacon,” ignoring this portion of the WaPo report:

Policymakers will have to decide whether to exempt inherently salty foods, such as pickles, while mandating changes in other products to reduce the overall sodium levels in the food supply.

The issue of salt in processed foods isn’t just about the American palate, either, as the WaPo report suggests. All that excess salt (1955 milligrams in a can of cream of mushroom soup, for example) isn’t just their for the flavor. It has preservative properties, and the flavor dissipates on the shelf, so you’re getting way more salt than you’re tasting.

Having said all of that, I have to agree that placing legal limits on the amount of salt in processed foods is going too far. I would much rather see the government figuring out ways to equip food banks with freezers, and figuring out ways to encourage the sale of frozen vegetables, which usually contain no added salt.

There already are programs in place to encourage low-income Americans to buy more wholesome foods, and those should be expanded, along with access to affordable fresh food. Certainly, the government could mandate a reduction in the salt content of school lunches. There are also tweaks that could be made to labeling laws, such as more realistic serving sizes.

So, while I essentially agree with Ed and Moe that the government shouldn’t impose legal limits on salt content, I think you can make the case without junk science and fear-mongering.