Even critics of Republican candidate Mitt Romney would have to admit that he took Newsweek’s desperation-reeking “Wimp Factor” cover in stride, but the same cannot be said for some well-trafficked corners of the conservative media. Sites from to are gleefully disseminating a parody Newsweek cover with a thick, juicy entree of misogyny, with a side order of racism. The parody cover features President Obama, with the headline “The Whipped Factor.”

Newsweek has a history of begging for attention with provocative covers, and the Romney cover is a classic example of this. The “Wimp Factor” peg is a self-referential tribute to a 1987 Newsweek cover story on George H.W. Bush, one which also achieved the cheap recognition its modern counterpart seeks.

To be clear, my objection to the Newsweek cover has nothing to do with notions of “civility” or an aversion to name-calling. The problem with the cover is that the critique has no value. The term “wimp” is the vernacular of unimaginative bullies, and therefore doesn’t present a supportable thesis. Additionally, as another blogger put it, “it equates superficial masculinity with competence and integrity.”

By definition, the use of this critique says more about the person making it than it does about Romney. Michael Tomasky‘s commentary makes the case that Romney is politically craven, a more focused criticism that, alas, doesn’t pop on the newsstand (that’s the place where old people buy printed versions of the news you read online).

However, the parody cover (originated by JLF‘s Jon Ham) that’s being passed around the right-wing blogosphere (with incisive commentary like “Heh”) is a hideous example of the worst in political tit-for-tat. Rather than lampoon Newsweek’s desperation for attention, these folks decided to take a shot at President Obama, picturing him on a Newsweek cover with the blaring headline “The Whipped Factor,” and sub-headlines about the influence of First Lady Michelle Obama and senior advisor Valerie Jarrett. 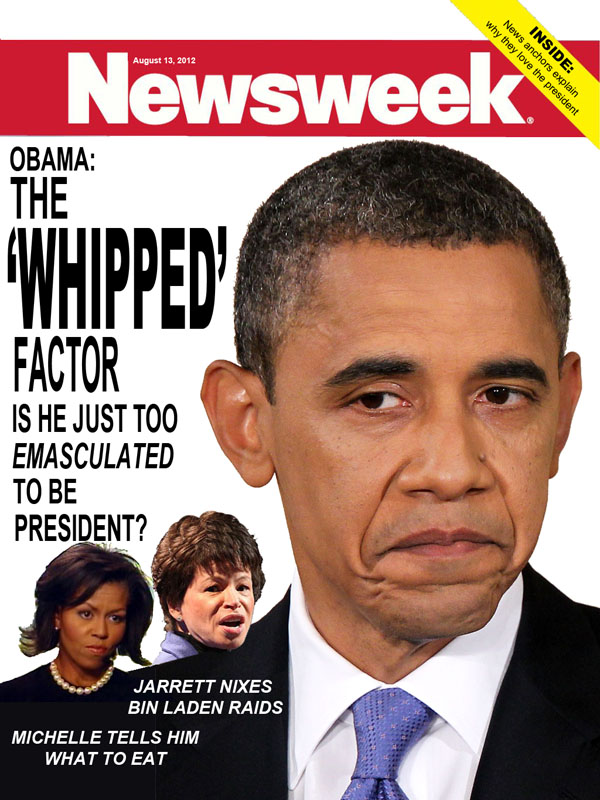 In case you’re unfamiliar with the subtext, “Whipped,” in this context, is shorthand for “Pussy-Whipped,” a bro-code pejorative meant to convey excessive deference to a female sex partner. Let’s not dwell on this, but simply imagine, for a moment, if influential, well-trafficked political websites like Politico or, hell, Mediaite decided to speculate on the effects of Ann Romney‘s or Sen. Kelly Ayotte‘s respective vaginae on Mitt Romney’s decision-making process.

As if that’s not offensive enough, let’s not discount the racial implications of calling our first black president, whom Ancestry.com has just linked to America’s first documented slave, as “whipped.” Oh, I’m sure they didn’t mean it that way, it’s just a happy coincidence that ought to delight the folks at Stormfront.

Instaundit and Powerline are very influential blogs in the conservative media, but it’s early yet. There’s still time for others to weigh in on the side of decency.